BBC.com is talking about the rum industry’s rise from pirate’s punch to sophisticated sipping spirit in recent years. While overall global rum sales decreased in 2014, the premium and ultra-premium market saw large increases. Predictions are that this trend will continue over the next decade.

“It used to be that nobody looked at rum as a premium spirit. But now, rum companies are changing their game. They’re spending more money on marketing and promoting the diversity of their product. More and more people are becoming aware that there are rums you can sip and savour like any single malt whisky or cognac.” Ian Burrell, UK-based rum specialist

Metro.co.uk has an interesting article about Ian Burrell, the Rum Ambassador and his job drinking rum. Born in Jamaica, Ian now resides in London when he’s not on the road touting rum around the world. 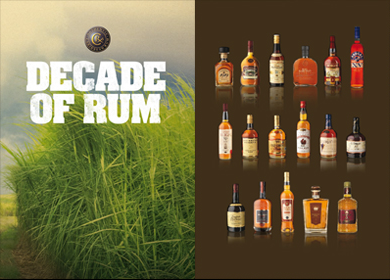 The West Indies Rum and Spirits Producers’ Association (WIRSPA) launched a new “International Market Report About Rum Activity This Decade—2000 to 2010: The Decade of Rum”.

From 2000 to 2010, Rum sales grew 40%+ worldwide and in the United States. Rum sales by volume is now fourth qorledwide followin Vodka, Whisky and Flavored Spirits.

As part of their Authentic Caribbean Rum campaign, the West Indies Rum and Spirits Producers’ Association (WIRSPA) published “The Decade of Rum” for trade press and industry professionals. It is an overview of the world rum market from 2000 to 2010 including insights and opinions from some of the world’s leading spirits experts. The report is available to download at https://www.acr-rum.com/en/learn/decade_rum.

Rum’s evolution over the last decade is examined including a closer look at some of the most important spirits markets in Europe and North America. Highlighting country-by-country data, market trends, and the performance of individual styles of rum. The Decade of Rum looks specifically at Authentic Caribbean Rum, its history, and how industry leaders view it.

The document also includes a series of Round Table discussions with more than 50 leading international spirits experts including journalists, bloggers, bartenders and industry insiders.

To qualify as an Authentic Caribbean Rum Marque, products must adhere to its criteria and regulations. The ACR Marque criteria is underpinned by:

1. The Marque license agreement which is issued and supervised by WIRSPA
2. The ACR Marque Conditions of Use and the ACRM Visual Identity Guidelines
3. CARIFORUM quality standards and labeling regulations
4. All regulations in the markets of sale (European Union, United States,
etc)

Martinique-based Saint James Rum has seen its global sales rise 14% in 2015 alone. The company marked its 250th Anniversary this year with celebrations around the world and with the limited release of an Anniversary rum. Along with on-island celebrations, the company’s profile has risen which has resulted in a “sales and notoriety increase”. (TheSpiritsBusiness.com)