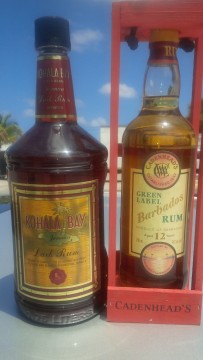 Today was a good day. I spent the day listening and learning from others while still managing to scour parts of Southern Florida on my endless rum hunt.

Using information found on AtomicGrog.com and the TikiCentral.com forums, I finally picked up a bottle of Kohala Bay Jamaican Rum. For tiki fans, Kohala Bay is a rum that is used in a number of the drinks served at the Mai-Kai. I am excited to finally make a Mai-Kai Zombie, Black Magic or 151 Swizzle using the correct rum. Additionally I found an old bottle of Cadenhead’s Green Label Barbados 12 year, some old stock Ron Cartavio Solera 1929, and a number of Florida rums.

Next I was off for Ft. Lauderdale, FL to meet with Avi and Joe at South Florida Distillers, the makers of FWAYGO rum. We spent 2+ hours talking rum, their future plans, and of course sampling their rum. FWAYGO makes a terrific white rum, a tasty grilled pineapple rum, and their newly released FWAYGO Single Barrel. FWAYGO Single Barrel was aged using new American oak barrels for 1 year, 1 month, and 1 day. It carries notes of fresh oak and grain cereal…quite good. These guys have a lot of projects in motion and I was impressed with their emphasis on local sourcing and their cross-promotion with other local entrepreneurs. 2016 is proving to be a big year for them and it will be interesting to see what comes next.

Before beginning my trip to Miami, I’d asked Miami Rum Fest founder Robert Burr for liquor store suggestions for my rum hunt. Robert steered me to Sunset Corners. After battling Miami traffic for an hour, I managed to conclude my rum hunt by picking up  bottles of Stolen rum, Ron Cartavio 12, a special blend of Mount Gay Black Barrel produced specifically for Sunset Corners, and a few other rums. I even picked up a French Gin for a dear friend back home. My trunk is now stuffed with 6+ cases of rum goodness. I think I now done with my Miami rum hunting. I’ve done enough damage.

My evening concluded at the hotel bar. Many of the RumXPs/Guest RumXPs were arriving from all parts of the globe to participate in this week’s rum judging. While I know many of thm through social media and their writings, it was quite nice to meet people in person. I am looking forward to the judging to begin in the morning.