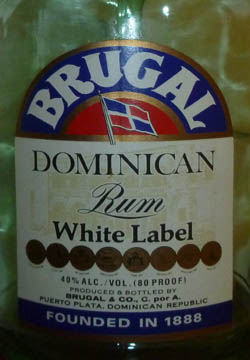 I’ll admit up front that I like Dominican Republic RUMs quite a bit. They typically are premium quality with understated, smooth as silk flavor. Brugal Anejo happens to be a personal favorite. So I was very excited to sip on Brugal’s White Label.

The vintage label on Brugal White RUM tells you it is ALL about tradition. From its “Founded in 1888” declaration, its green hewed bottle, its old script lettering and its eight early 20th century gold medals earned, Brugal lets you know that this rum has stood the test of time. Its long tradition proudly lets consumers know what to expect. Brugal’s White Label has a light coconut/sweet floral aroma and a crystal clear color.

For an 80 proof RUM it has a stronger initial burn than I anticipated. It has an understated flavor from start to finish with hints of coconut, sugar and charcoal. Its remain is as fresh and sweet as one would expect from a well made Dominican Republic RUM. White Label over ice is a mellow sipper but nothing overly special. It is probably better suited for Tiki drinks. My last taste test is mixing my RUM with Coke Zero. This proved that a light RUM like Brugal White is easily lost when mixed. Brugal White Label has a long tradition as a light and mellow white RUM perfect for cocktails.