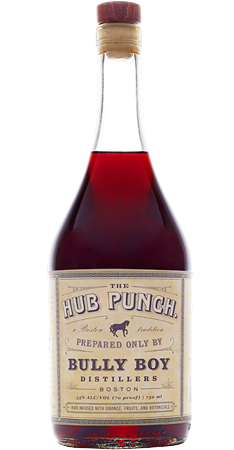 Bully Boy Distillers, a company founded by two brothers with a family history that might dismay bluenoses and temperance types, is gearing up to launch Hub Punch, an updated take on an alcoholic beverage that is said to have been widely swilled in these parts in the late 19th century.

The company was founded in 2010 by brothers Will and Dave Willis, who claim that one of their great grandfathers ran a Prohibition-era speak-easy on his farm in Sherborn.

According to company lore, the brothers were inspired to give up their day jobs and get into the spirits trade after discovering a vault full of strong drink on the family farm.

To create Hub Punch at the Bully Boy distillery in Roxbury, the company says it starts by steeping its Boston Rum with orange peel, lemon peel, and raspberry. The next step calls for an enlivening infusion of a “secret assortment of botanicals and herbs.” (As every connoisseur knows, secret botanicals can put the tin hat on a well-crafted drink.)

The resulting Hub Punch, a press release says, is “a versatile 70-proof spirit” that can be served on the rocks, or mixed with soda water, ginger ale, lemonade, or iced tea.

It can also be pressed into service to provide a cocktail with “a unique, fruity sweetness,” the release says.

The suggested retail price will be $28.99 for a 750-milliliter bottle.

Plans call for the roll-out of Hub Punch to begin later this month, and for Hub Punch to be available in bars, restaurants, and retailers in Massachusetts and Rhode Island, the company said.

“As soon as we learned about Hub Punch, we knew that we wanted to reconstruct this classic Boston drink,” Dave Willis said in a statement. “After painstakingly piecing together everything we could uncover about this extraordinary drink, we’re extremely proud of the finished product and are eager to reinstate Hub Punch as Boston’s signature spirit.”