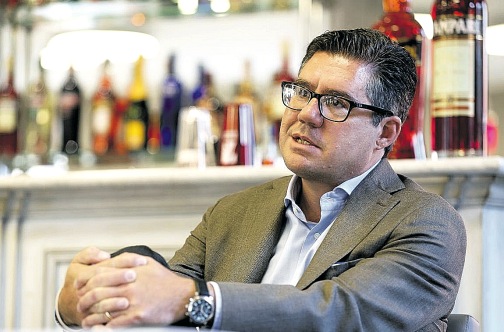 The Campari group is willing to consider selling its Captian Morgan rum brand if offered an attractive price, according to CEO of the global company Bob Kunze-Concewitz.

In an interview with the Jamaica Observer while in Jamaica recently, Kunze-Concewitz said that if the company received an “attractive proposal” for the brand “we would consider it”.

He noted, however, that his company was in the business of buying brands, not selling them.

The Captain Morgan brand produced by J Wray and Nephew is not well known in Jamaica and cannot be sold elsewhere, as Diageo owns global rights to the brand outside of Jamaica.

When the Campari Group bought J Wray and Nephew four years ago, it was primarily to add the Appleton and J Wray Overproof rum brands to its growing portfolio of alcohol products.

But with those two brands, it also acquired almost 50 other brands — including Captain Morgan — a remnant from the days when J Wray and Nephew partially owned that global brand. The result is an anomaly, where the global brand cannot be sold in Jamaica, and the local brand cannot be bought outside of the island.

Captain Morgan, however, is far from being a top priority.

With 50 brands “we need our people to have clear priorities”, Kunze-Concewitz told the Business Observer. That means focusing on the top three brands, and not on other brands – including Captain Morgan, but also others such as Charley’s Black Label, Coruba and Sangster’s liqueurs.

Outside of Appleton, the company is heavily promoting White Overproof, which is marketed to mixologists as a unique ingredient. Its sale to that market is “going very, very nicely”, Kunze-Concewitz said.

And the company continues to grow. Since buying Appleton, Campari has bought another well-known brand – Grand Marnier – its 25th acquisition since 1994, at a price of about 14 times Ebitda.

There are currently 21 markets overseas, including in the Asia/Pacific region, Australia, New Zealand, Argentina, Peru, Brazil, South Africa and Europe.

The Campari Group is the sixth largest spirits group globally, but is some distance from the top three — including Diageo — which are in another league, the CEO said.

The company “really don’t get so excited” about the idea of taking over the top position, he said, but try to focus on gaining 10 per cent growth per year — half organic and half through acquisitions.

“We are the best performing spirits stock in the world.”

Campari went public in 2001 and trades on the Milan Stock Exchange in Italy, but is majority family-owned with a 51 per cent holding.

“This gives us a long-term view,” he said, with the chairman looking at five years and 10 years. The company’s aim is to get a 10 per cent return in year one, before tax — and Appleton has lived up to that goal.

As an international company, with its headquarters in Milan, Jamaican employees have benefited from working in Campari locations abroad, including the US, Italy, the UK and Canada and for projects in markets such as Mexico.

“We had a long relationship with Appleton as it produced Campari for nearly 40 years.”

That long relationship has helped to ensure that Campari’s flagship product continues to do well in Jamaica.

“Campari is the largest imported premium brand in Jamaica,” Kunze-Concewitz said. “Campari is on fire,” in Jamaica.

“Jamaica was the fastest-growing market for Campari in 2016,” he said noting that Jamaica was in the top 10 markets for Campari, ranking at about 7th position.

But Campari’s biggest seller isn’t actually Campari at all, but its close cousin Aperol, which originated in Venice. Campari bought the company in 2003 as a defensive move, Kunze said. But with the Aperol Spritzer becoming one of the most popular cocktails in Europe, the bright orange spirit has become a huge hit.

But the secret to a really good Aperol Spritzer is not to follow the official recipe — which is 3 parts sparkling wine, two parts aperol and one part soda. The Campari CEO says the real mix should be 50/50 Aperol and sparkling wine with just a splash of soda.