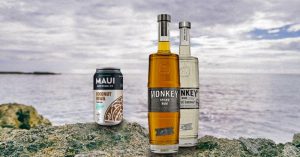 Monkey Rum’s Founder and Chairman of the Board, Zane Lamprey, describes the potential partnership: “I’m beyond excited to be working with my good friend (and maker of my favorite beer) Garrett Marrero from Maui Brewing Company on a collaboration between Monkey Rum and Maui Brewing Company. Garrett and I have been friends for almost a decade, and we’ve been talking about this collaboration for several years.

“Garrett and I first met while shooting Three Sheets back in 2008. I was a fan of his beer and quickly became a fan of the man behind the beer. A few years later, after Travel Channel picked up Three Sheets, fans chipped in and bought Maui Brew Company beer for Travel Channel. We ended up shipping five pallets of beer to their headquarters in Maryland. We shot again with Garrett for Drinking Made Easy in 2011. And in 2012 Garrett and his lovely wife Mel were at the ceremony when I married my Mel at the Olowalu Plantation House on Maui. We find a reason to visit them every year (I mean, it’s Maui, do I even need a good reason to go there?!).

“Our 2017 collaboration will consist of a Maui Brewing Company beer aged in Monkey Rum barrels, and then a limited release of Monkey Rum aged in those same barrels after they’ve soaked up their Maui goodness. I look forward to sharing details soon!”

The actual collaboration product is yet to be confirmed; however, early experiments point to an extension incorporating the base beer of Imperial Coconut Porter (2016 GABF Gold Medal Field Beer Champion) which is brewed with hand toasted coconut, and subtle hints of cacao and coffee. Additional time on the wood will lend an added booziness and vanilla flavors to the viscous base beer.

Both companies are deeply connected to sustainability efforts and their respective communities. MBC is a fiercely local company and has remained steadfast regarding local production. The MBC team are stewards of their communities and the ‘aina, and curators of the craft beer way of life. Their beers have been recognized worldwide for quality and innovation. Monkey Rum is delivered in the world’s first bottle designed to be recycled into glassware. Instead of throwing your empty bottle away when you are done, you return to the store you purchased Monkey Rum, and exchange the empty for a rocks or pint glass made from recycled Monkey Rum bottles.

Monkey Rum is closing an investment opportunity for their fans today, February 13th at 11PM EST. With over $2M in investment secured so far, Monkey Rum will be expanding across the country in 2017 and encourages anyone interested to visit https://wefunder.com/monkeyrum for more information.

To stay connected with Maui Brewing Company for future details on 2017 collaboration, be sure to sign up for their newsletters and product information on their website at http://mauibrewingco.com