In addition to traveling to major rum and tiki festivals this year, I set a 2017 goal to tour each of South Carolina’s 17 rum distillers.

Correction: Gorget Distilling Co. contacted me to correct a few items in my article. Gorget SilveRum is bottled at 96 proof, not 90 proof. Also, only Gorget’s Root Beer rum uses a true artificial flavoring the rest of their flavorings us natural flavor extracts. I have edited the text below to reflect these corrections. My sincerest apologies for my misstatements.

Gorget’s Distilling Co. is a South Carolina-based craft distillery located about 30 miles from the state capital of Columbia, South Carolina, in the small town of Lugoff-Elgin, SC. Founded by two friends who met through their day jobs in the lumber industry, Gorget derives its name from the piece of body armor used to protect the throat of 17th and 18th century soldiers.

Gorget now bottles eleven different spirits including a vodka, a bourbon, and aged-spiced rum, a series of flavored rums. They produce a total of eight different rums including their top selling C&V rum (Cinnamon & Vanilla). Gorget is distributed across South Carolina through Aleph Wines in Columbia, SC.

During my recent visit to the distillery, co-owner David Rumsey and I spent nearly two hours talking about (and tasting) Gorget rum. 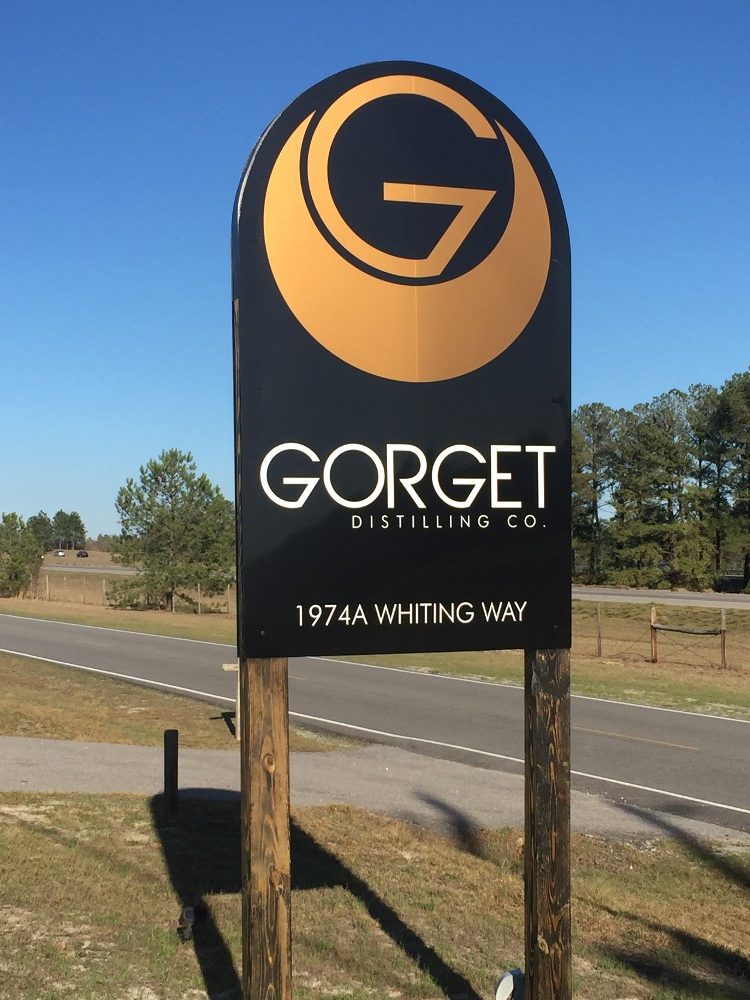 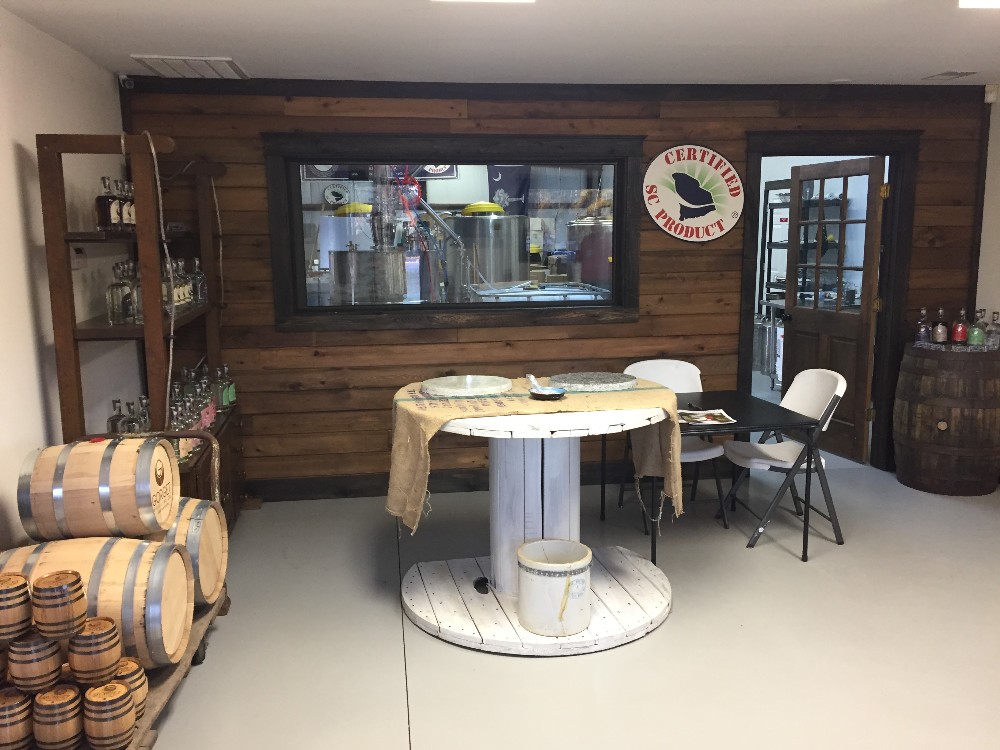 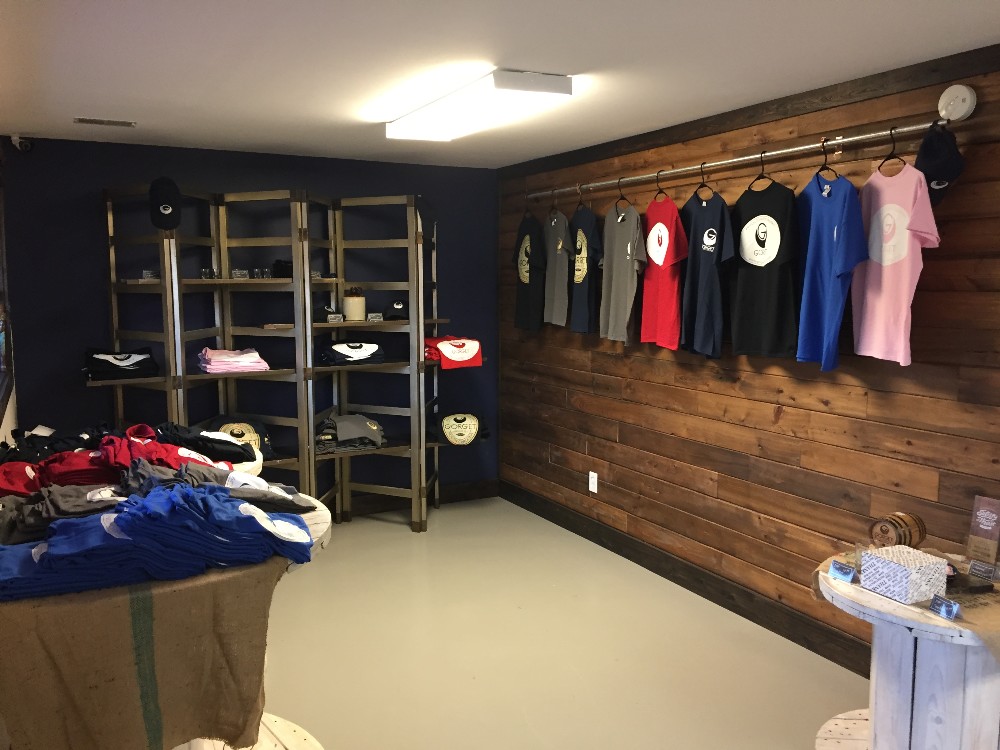 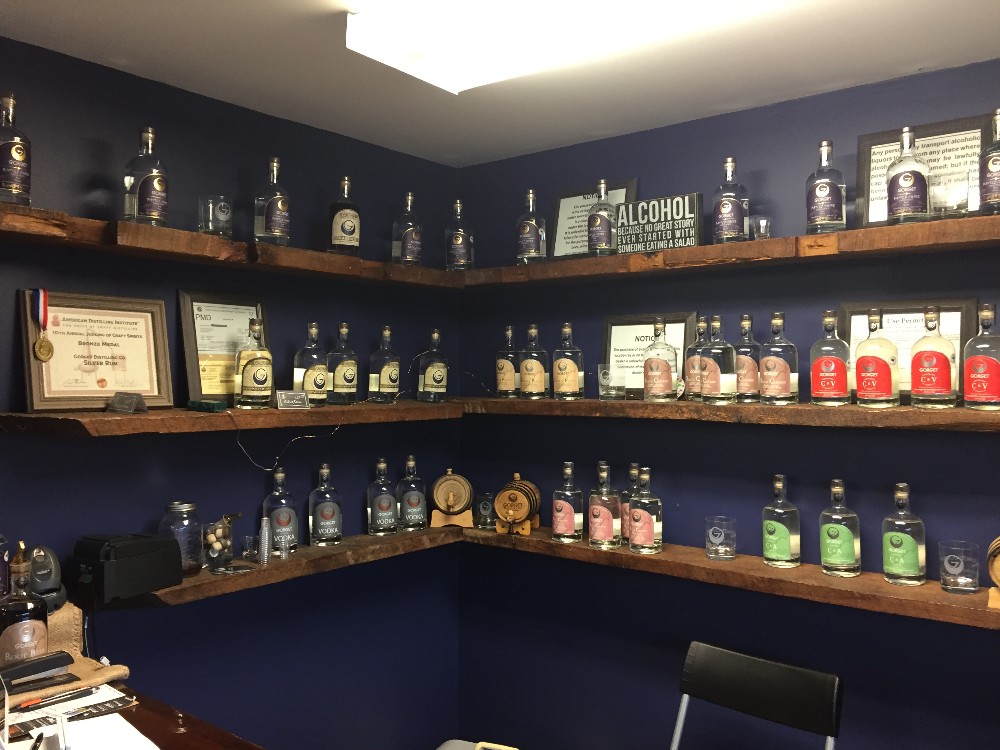 Gorget has two stills that they can use for production runs. Their primary still is an in-house constructed, 130 gallon, stainless steel pot still with a custom designed column. Below, on the left, is a photo Gorget posted to Facebook showing the still’s construction. Below, on the right, is a photo I took during my visit. It shows their primary still and their secondary, stainless-steel barrel/keg still. 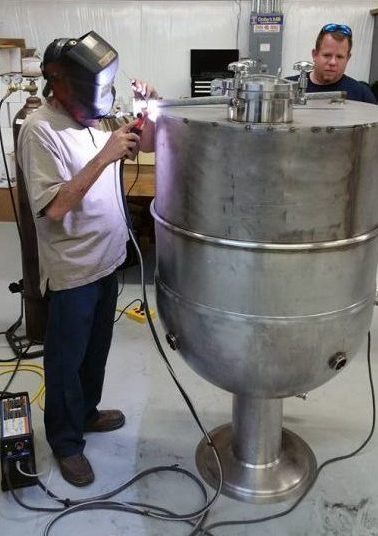 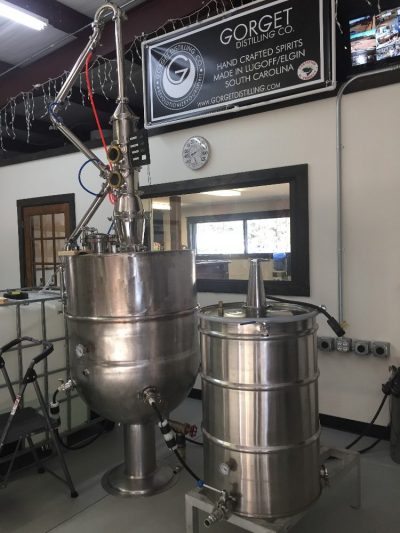 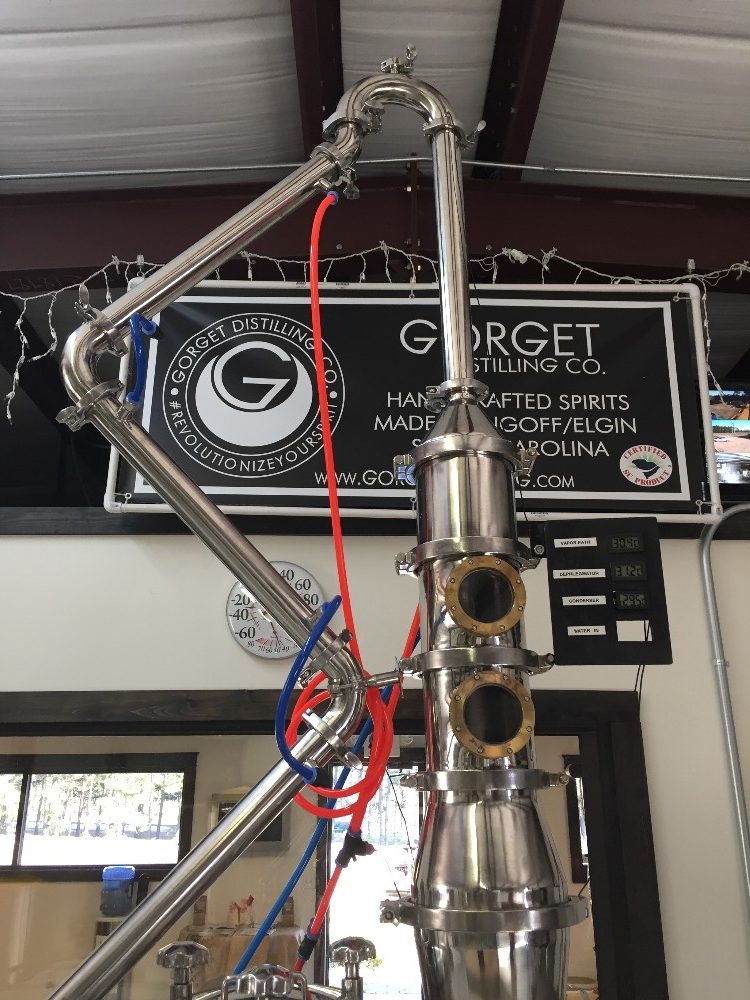 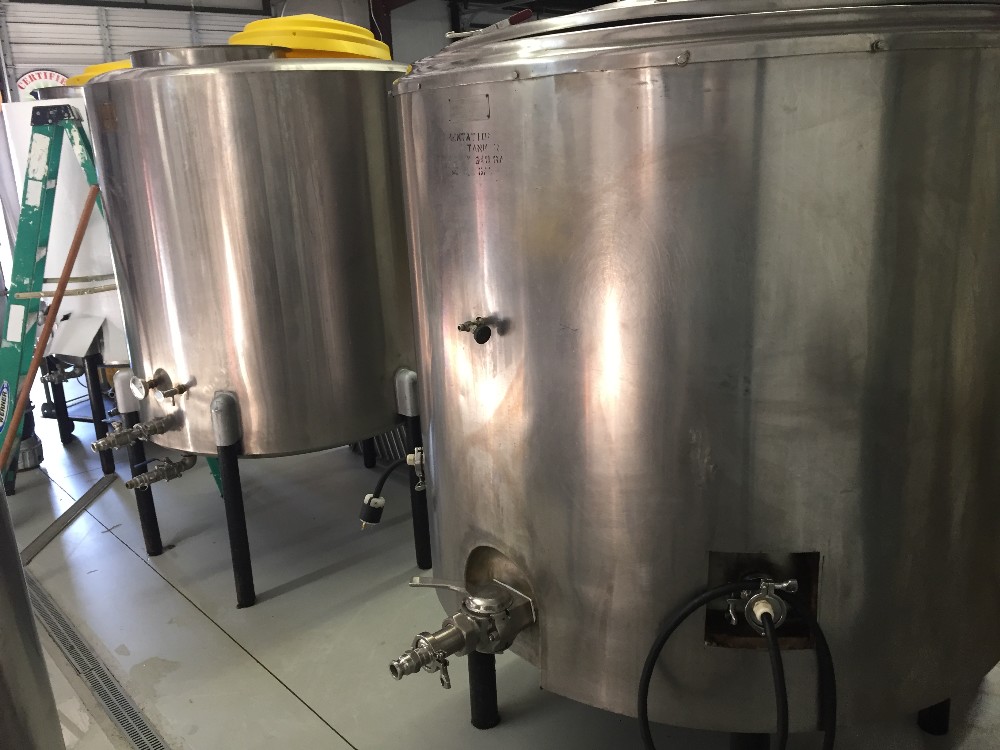 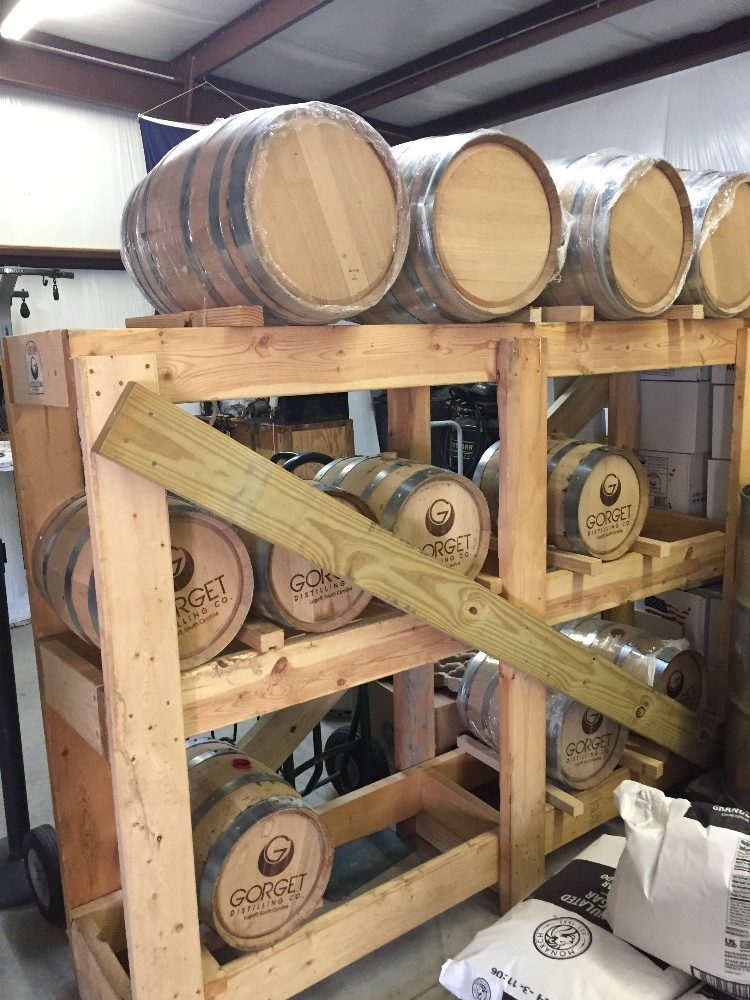 After an hour of talking South Carolina distilling and rum production, we moved into the tasting room. I was ready to try Gorget’s SilveRum and their Gadsden’s Aged Spiced rum.

The SilveRum drinks smoothly for an unaged, higher proof rum. It’s a clean rum with few of the harsher notes sometimes found in American rums. Their Gadsden Aged Spiced rum has been aged approximately a year in heavy-char, new white oak barrels that were seasoned with ground coca, vanilla, and raisins to enhance its flavor. Bottled at 90 proof (45% ABV), Gadsden has light oaky, vanilla notes with minimal throat burn. While I am not sure I would drink either of these neat, both rums should work well in cocktails.

David was kind enough to walk me through the array of flavored rums offered by Gorget. The flavored rums were born out of demand by distillery visitors who are accustomed to sampling flavored moonshines at other distilleries. I was saddened to learn that all of Gorget’s flavorings use flavor extracts (natural and artificial) instead of being infused with fresh ingredients. My ears did perk up with the mention of a fresh Peach infused rum being discussed.

Each of the flavored rums seemed well balanced with their taste matching their label description. David said their Cinnamon & Vanilla (66 proof) is the top selling flavored rum. The C&V appears a little cloudier than the other flavored rums. It carries a strong Cinnamon flavor (think Fireball Whisky) that is smoothed during the finish by the vanilla flavor. While I was least excited to try the Root Beer flavored rum I did sample it. The taste was as expected carrying a bold, root beer candy flavor without being too sugary. It’s deep black appearance comes from the added flavoring’s coloring.

I want to thank David again for being so welcoming during my visit. I’ll be watching to see where their distilling adventure leads them and what they are able to do with their rum line.