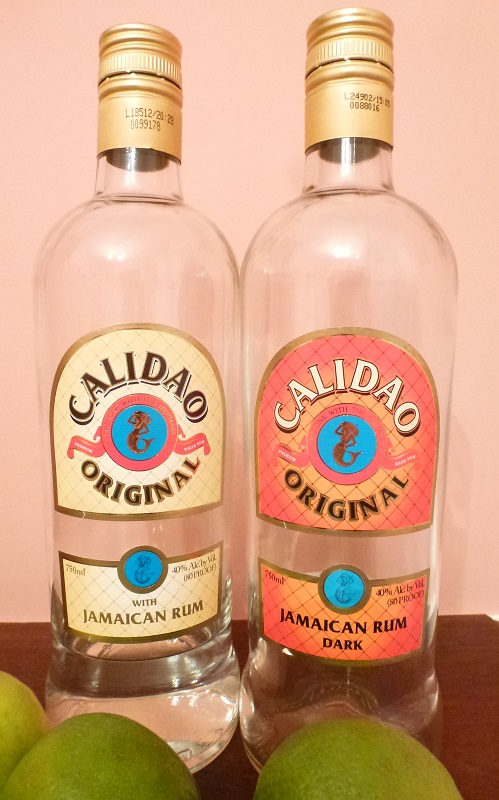 When I sat down to review Calidao’s Original Jamaican Dark and White rums I was not familiar with the brand or its background. I had bought both Calidao expressions for $7.99/750ml at my local Total Wine months ago. While I am not afraid of bottom-shelf rums I admittedly tend to shy away from them. For this reason these two bottles have sat in my collection for awhile without being touched.

Searching for details about the brand turned up fairly little information. From RumProject.com I learned that Calidao has an identical twin…the Germany-released Feiner Alter Asmussen Jamaican Rum. I also learned that while the Calidao brand has only been used in the United States for a few years, Calidao and Asmussen, known as “The One with the mermaid”, have been available in Germany for decades. In Germany, the Calidao brand primarily used to market flavored rums/liqueurs (Raspberry, Coconut, Mojito, Pina Colada).

The brand-name, Calidao, seems to be a derivative of two Spanish words, Cálido and Calidad, which loosely translates into “warm quality”. Based on this translation, I expected that Calidao would fit squarely into the Jamaican rum mold of bold, high-ester, full-flavored rums. But with each bottle of Calidao sitting at 80 proof, lower than many Jamaican rums, I was concerned that my prediction would be off. Let’s see if I was right?

Calidao Jamaican Rum – the one with the mermaid – can be enjoyed all year round. Its aroma and rich fullness convey the exotic taste of Jamaica.

Instead of a deep caramel color, typical for dark rums, Calidao Jamiacan Dark rum has a golden yellow color with slight green hew.

The front label quote “The One With The Mermaid” couldn’t be more right. The Calidao mermaid actually appears three times on the Calidao bottle. On both front labels: In the top label in blue/gold and in the bottom label in blue/black. And, when the bottle is empty, the third mermaid logo is visible on the inside back label.

Something to note, the Calidao bottles carry a thick, bottle-mold seem that ran directly through the bottle’s front label. In my opinion, this hurts the rum’s presentation and made the rum look less appealing on the shelf.

Whoa, this rum packs a strong dunder air. That probably explains the hint of green I noticed in it’s color. I detect an oily, smokey, burnt rubber aroma with an under tone of leather. After letting the rum rest I also picked up notes of butterscotch.

The beginning carries a subtle sweetness with vanilla and the slightest hint of orange. The middle brings an oily molasses surrounded by white pepper and a growing heat. This rum kinda screams “Jamaican pot-stilled”.

Overall I found Calidao Original Jamaican Dark Rum to be a strong, uniquely-flavored rum that is typical of many Jamaican Rums. I don’t think it has the quality to be considered a sipping rum but it might be unique enough, and inexpensive enough, to toss into a mixed drink for something different. I enjoyed this rum more after I sampled it a few times but I am not sure if my enjoyment came from the rum or the alcohol.

Calidao White Rum made with Jamaican Rum tastes delicious in a fine exotic Mojito. Crush limes and mint leaves, add cane sugar and 5cl rum. Then fill the glass with crushed ice, add a dash of soda or sparkling water, and serve with a straw.

Calidao White is a sweet, sugarcane rum with a light coconut and butterscotch aroma which wraps around hints of alcohol.

Calidao White tastes like a very sweet, young rum. It has a notable coconut and vanilla flavor but it’s so sweet it reminds me of bubble gum. I found the rum thick on the tongue with an even warmth. The remain carries a light banana flavor which was pleasant but overall the rum is too sweet and viscus on the palette for me.

I don’t really think Calidao White was produced as a sipping rum so I decided to mix up a quick daiquiri and see how it would perform. For the most part I enjoyed the Calidao White daiquiri. My only complaint would be that it was pretty sweet.

Overall I found Calidao White too sweet for my preference and not a rum blended for sipping. It might work in a punch or a basic cocktail but drinkers should adjust their recipes to balance them against this rums sweetness.