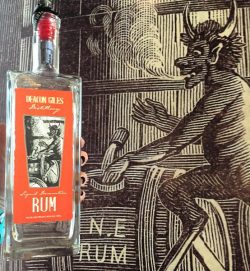 Since the company was founded by friends and former brewers Ian Hunter and Jesse Brenneman, why did they name it Deacon Giles Distillery?

Who is Deacon Giles?

That is a good story and a quick read of the distillery’s website explains that it starts with a Temperance tract printed in Salem, circa 1835. As the story goes…

“Amos Giles was an impious man, distilling rum on the Sabbath, paying his employees with liquor and selling bibles from his counting room. After his employees finally walked out in anger, he unknowingly hired a gang of demons to operate his distillery. The demons decided to play a trick on Old Deacon Giles, secretly branding his barrels with messages of damnation that glowed with an unholy light when tapped. This story, first published in 1835, was purported to have been a vision of George B. Cheever, a young firebrand minister in Salem who went on to be a leader in both the temperance and anti-slavery movements. The story created a great uproar, as it was apparent to most that it was a thinly veiled lambasting of a popular local businessman. Cheever was whipped in the street and convicted of libel, but his story was reprinted numerous times under the title, “The Dream, or, the True History of Deacon Giles´ Distillery.”


Inspired by this story and New England’s long history of rum production, the two friend decided to switch from brewing to distilling.

Liquid Damnation is the first rum to be hand-crafted and distilled in Salem, MA for more than 100 years!

Our Rum starts and ends with molasses, just as it should. We use a unique blend of Blackstrap and Fancy molasses to create the type of wash the Old Deacon might have made himself. From careful fermentation using ale yeasts, to artful cuts made on the still, our distinctive process creates a well balanced rum that is not too sweet and not too dry, with a hint of pepper and banana up front, and notes of caramel and vanilla in the finish. Exceptionally well-behaved in any cocktail, but happily irreverent on its own.