Roman Candy Rum, based in New Orleans, LA, is now producing three flavored rum expressions (Chocolate, Vanilla, and Strawberry). The flavors match the traditional candy flavors produced by the long standing family candy business. In all honesty I have tasted a few sips of Roman Candy Rum pool side at the Miami Rum Festival. Unfortunately I did not sample enough for a full review.

Over the last 100 years, the Roman Chewing Candy has been a New Orleans tradition. Their hand-pulled molasses taffy has been sold from a wooden, mule-drawn wagon along the streets of New Orleans. The red and white wagon is still a fixture of New Orleans clanging its bell and calling children and adults alike to come enjoy their chocolate, vanilla , and strawberry taffy. 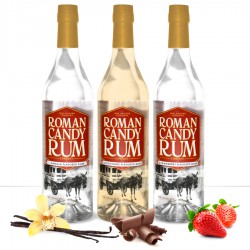 In celebration of the Roman Chewing Candy’s centennial comes the release of Roman Candy Rum.
A rich Caribbean based rum, made from molasses like the original candy, and infused with the same traditional Roman Candy flavors…Chocolate, Strawberry, and Vanilla. A new tradition birthed from an old one, but with an alcohol twist. Their rum is flavored to taste just like their candy but for grown ups!

The Roman Candy Company began as a family treat with a recipe that dates back at least four generations. Great grandmother, Angelina Napoli Cortese, made the candy for family and friends at social and special events like Christmas and St. Joseph’s Day. Her son, Sam Cortese, who was a street vendor by trade since the age of 12, would on occasion bring the left over candy on his fruit and vegetable wagon to sell the next day. Roman Candy always sold very well and people began to ask for it, so Sam decided to try to sell candy on a regular basis. The problem however was that his mother didn’t have time to make candy everyday and still tend to her other children and do all the things that mothers do. Sam realized he would have to find a way to make his Roman Candy as he rolled along and sold it. In 1915, he went to a wheelwright named Tom Brinker and together they designed the wagon that is still used today. The Roman Candy gourmet taffy initially sold for 5 cents a stick and stayed at that price until 1970. After his death in 1969, Sam’s grandson took over the business and it continues to this day.

Roman Candy Rum will soon be offering both an Aged and a Dark Rum also.