MHOBA Rum is the original South African small batch artisanal rum produced from our local Nkomazi sugarcane. Produced from sugar cane, MHOBA Rum is what is termed an agricultural rum from the French term “rhum agricole” as opposed to most traditional rum which is often mass produced from molasses, the by-product from refined sugar production. MHOBA Rum is 100% pot distilled and therefore what is termed Pure Single Rum, the rum equivalent of a Single Malt Whisky.

MHOBA Rum is made directly from fresh unprocessed sugarcane juice squeezed from sticks of Nkomazi sugarcane. Our sugarcane is grown on the farm surrounding our microdistillery on the outskirts of the small town of Malalane in the heart of the cane-growing area in the Crocodile River Valley of Mpumalanga, South Africa.

The MHOBA Rum Distillery is housed in an old farm building which has been renovated and upgraded to accommodate the rum production.

The fermentation, distillation, ageing and bottling of our rum is performed at the farm which is home to MHOBA Rum. From planting and growing sugarcane to be pressed to produce our fermentation wash, through to the printing, labelling and the forming and sealing of our bottle caps everything involved with the production of MHOBA Rum is performed by the small team of MHOBA Rum employees.

The unique character and taste profile of our rums are due to several factors specific to our location and style of rum making. Referred to as “terroir”, the local conditions such as climate, soil type and the varieties of cane that thrive in our area help contribute to form the distinct “sugarcane” flavours and aromas common to all of our rum. Fermentation of our sugarcane wash is performed using a local supply of yeast at the warm ambient temperatures provided by our tropical climate.

Our proprietary, custom built small batch stills produce extremely pure and concentrated cane rum batches of between 20 and 25 litres. Each batch is distilled with great care and attention to temperature which determines which fractions of the batch are collected, discarded or re-distilled with a future batch. This careful but time consuming method of distilling allows a much more refined raw rum spirit than would be possible with large scale continuous distillation processes which do not separate any of the distillation fractions. Each individual concentrated rum batch is then checked for taste and aroma before being blended with other suitable batches and local rock fissure water to achieve an ideal ageing concentration. 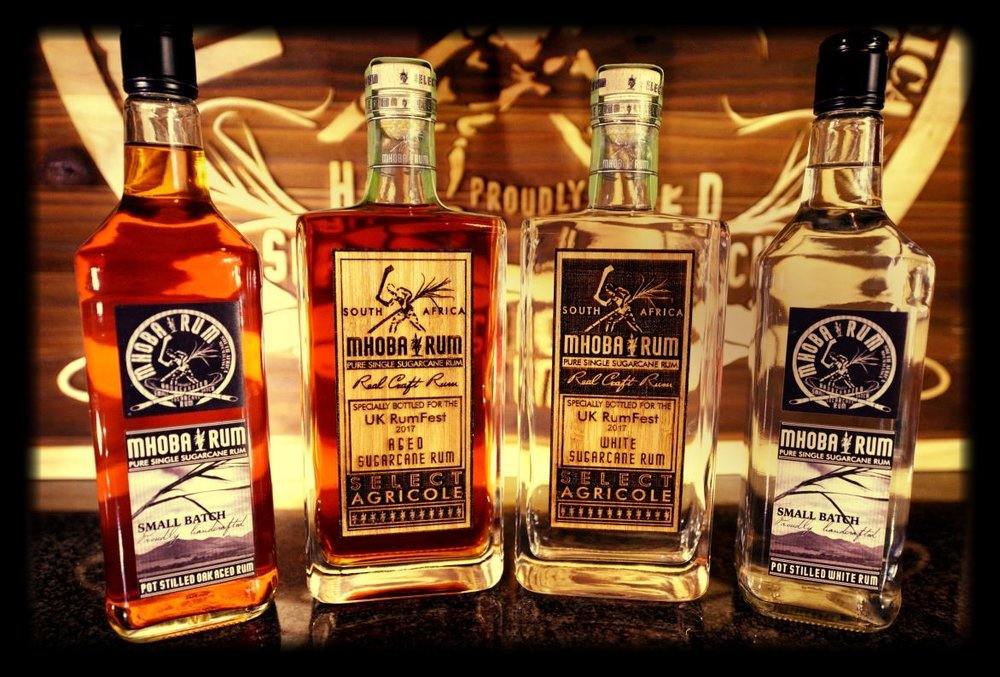 MHOBA Rum is then rested, mellowed and flavoured using toasted virgin American white oak until the rum has acquired the optimum flavour, aroma and colour from the interaction with the toasted oak. Once the rum has achieved the required flavour, colour and aroma the rum is filtered from the virgin oak before being blended with other suitably aged batches and bottled at the MHOBA Rum distillery.

GREAT CARE IS TAKEN IN PRODUCING EACH BOTTLE OF MHOBA Rum TO PRODUCE WHAT WE BELIEVE IS SOUTH AFRICA’S MOST AUTHENTIC AND UNIQUE SMALL BATCH PREMIUM RUM.

Sugar, water, toasted oak and time. No flavourants, no colorants.

WHERE IT ALL BEGINS

The road to our Distillery, surrounded by the very same sugarcane that gives birth to our superb single estate small batch pot stilled Rum…MHOBA Rum. Situated in Nkomazi in Mpumalanga, a stones throw away from the Crocodile river and the world famous Kruger National Park.