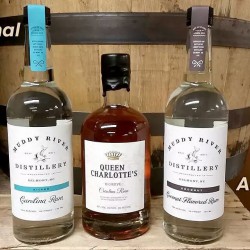 Queen Charlotte’s Reserve – “Queen Charlotte’s Reserve is barrel aged one year in virgin American white oak barrels. The barrels are charred on the inside, leaving it with a smooth, oaky finish. No coloring or flavoring is added to this product, it is simply barrel aged for color. A surprisingly well balanced rum that’s a pleasure to sip. We hope that you enjoy our American made rum as much as we do.”

Silver Carolina Rum – “Muddy River’s first product Carolina Rum launched in September 2012. Our small batch rum is produced in a one of a kind still specifically designed and built by the company’s founder and head distiller to produce a premium quality rum with a distinctive, smooth taste. This rum has won awards including the Big Sip Cup. Check out the link below for recipes.”