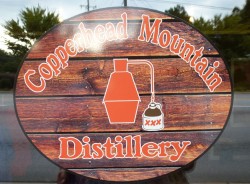 This past Tuesday, two friends and I made the journey to Copperhead Mounting Distillery (CMD) in Travelers Rest, SC, for a quick tasting tour. Like many new Southern distilleries, CMD focuses primarily on Corn Whiskey but they also make a sugar-head Rum plus they are launching a full line of flavored moonshine expressions. 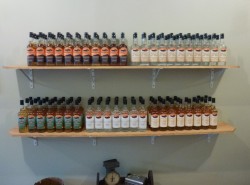 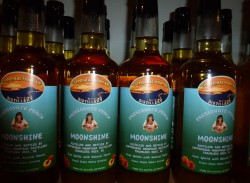 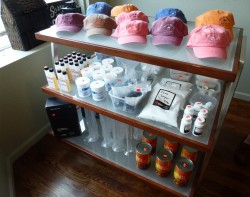 CMD has setup shop in a former doctor’s office situated in the heart of Travelers Rest, SC, a whistle stop town north of Greenville, SC. With a small serviceable retail shop were visitor’s can purchase spirits, edibles, gifts, Copperhead Mountain Distillery wearables (hats, t-shirts, polos, etc.) plus home brewing supplies. They currently operate tasting tours on Tuesday and Wednesday evenings which includes samples of their products a discount on purchases. 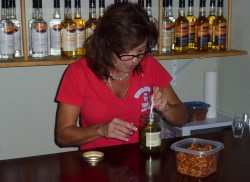 Copperhead Mountain is a family business run by John and Regina Connelly aided by their three daughters. John said he started CMD with two specific goals in mind:

We started our tour with a number of edibles created by Copperhead Mountain. We tried the Apple Pie Moonshine and Muscadine Moonshine jelly, the Moonshine Bread & Butter Pickles and their Moonshiner’s Hot Sauce. I particularly enjoyed the hot sauce. It had a nice mix of citrus (perhaps pineapple), pepper and vinegar.

Looking around their tasting room I noticed a number of old photographs on the walls. Regina explained that most of the photos documented her family’s Appalachian heritage. I also noticed a nice collection of vintage barware (decanters, bottles, etc.) on display around the retail shop and the tasting room. The decoration is enough to add some character but not so much as to distract from the business’ purpose…alcohol. 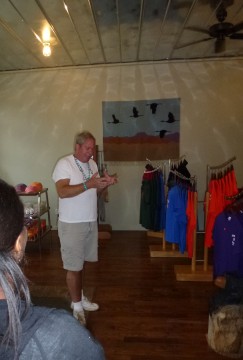 John Connelly took over the tour from here as he quickly walked us through a brief history of distillation. Beginning with Ancient Mesopotamia through Europe and into the United States. He talked about Revolutionary era distillation, the Whiskey Rebellion and the Prohibition era.

John also mentioned that he had recently appeared as a moonshiner on National Geographic Channel’s Doomsday Castle.

CMD uses two small, all copper stills. John told us that they are capable of producing about 12-15 gallons per week. He explained that Regina produces all of their corn & sugar mash in house and that their daughters hand strain before it goes into the still. CMD sources many of their ingredients locally and they hand catch all of their alcohol one quart at a time. 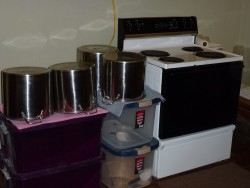 John explained that he is very careful to only bottle the “heart” of each distillation batch. The “heart” is the highest quality liquor produced from each mash and it comes out at around 125 proof. CMD bottles their primary spirits at a hearty 100 proof. Here is something to look forward to, John mentioned that he is working on rye whiskey recipe.

Their sugar-based rum is distilled in the same fashion as their corn whiskey. John called it “Sugar Head” whiskey; I have also heard it called “Sugar Jack” or “Sugar Based Wash”. It is not a traditional rum because it does not use any molasses or sugarcane juice in the mash. I believe it is labelled as “rum” by the SC Tax and Trade Board simply because it begins with a sugar base. 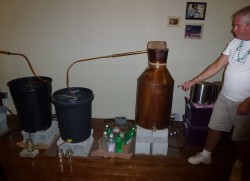 I am not the biggest fan of corn whiskey moonshine but I found Copperhead Mountain’s moonshine to be quite good. Their shine lacks the deep smokiness that I typically equate with moonshine. For 100 proof, both their white and gold moonshine’s were smooth and light. To age both their moonshine and rum, CMD uses heavy charred, American Oak chips. When tasting, you can immediately pick up the fresh oak flavor in both of their gold expressions. 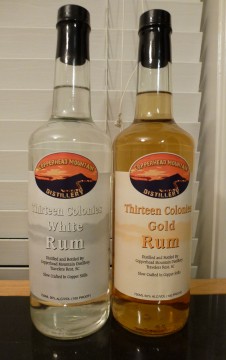 Tasting their 100 proof white rum reminded me of a slightly diluted version of their corn whiskey. It didn’t seem to have any overpowering flavor and probably would blend well with fruit juice. Their gold rum tasted smooth with a noticeable infusion of oak. I bought a bottle of both and will do a full tasting review sometime soon.

Overall it was a nice way to spend an hour or so. I really like that Copperhead Mountain is a family affair. The entire Connelly family was personable and made it a fun experience. Their operation is quite small compared to others but they seem to know what they want their distillery to be. They currently do not have a distributor for their spirits so if you want to try their products you will have to visit Travelers Rest, SC.