Following its successful launch in France, Fair Spirits has released its Belize rum in the United Kingdom.

Founded in 2009, the Fair Spirits Company is dedicated to creating high quality products that are sourced ethically and sustainably. Fair believes in treating all people fairly and they source all of the ingredients for their spirits under the Fair Trade ethos. Fair is the world’s first and unique Fair Trade Certified line of spirits. Guided by about 200 rules that make sure farmers are paid a fair price which enables them to cover their production costs, live from farming, educate their children and build schools. 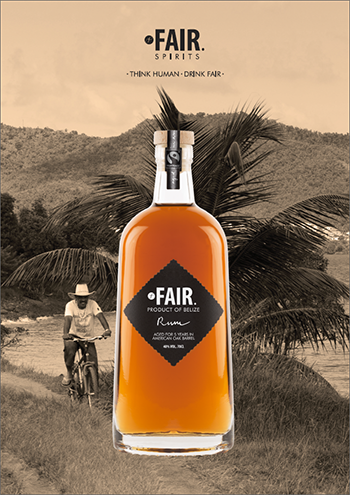 Fair rum originates in the Central American country of Belize. All of Fair’s sugar cane is grown using organic and sustainable farming methods on small farm plots. The sugar cane is hand-harvested which maximizes the yield and protects the land. All of their growers are members of the Belize Sugar Cane Farmers Association (BSCFA).

So, what can you expect from Fair Spirits Belize Rum? Well, it is made from molasses and aged for five years in American oak barrels, uses traditional fermentation and distillation processes. It has a golden amber color with complex tasting notes which include coffee, chocolate, and banana. Fair notes that the rum has a delightful vanilla and chocolate finish.

Fair ships all of their spirits to Cognac, France, where Master Distiller Philip Laclie perfects their blend before bottling. Fair is distributed by La Maison du Whisky in France and UK’s Coe Vintners and has a suggested retail of £38/70cl.