Today we celebrate the 50th Anniversary of Black Tot Day. July 31st, 1970 was the last day on which the British Royal Navy issued its sailors a daily rum ration, known as the daily tot.

The 300+ year traditional tot lives on in various Naval Rums but Pusser’s British Navy Rum is the closest in flavor profile most rum drinkers will have the opportunity to try.

“From 1650 throughout the 18th century, shipboard life was incredibly difficult. The daily issue of Pusser’s Rum was the highlight of the day. In those days, battles were fought “eyeball-to-eyeball.” The mental alertness and courage required to pack a cannonball into a muzzleloader were far different from that required to operate the modern weapon systems of today. Thus in 1970, the Admiralty Board decreed that there was no place for the daily issue of rum in a modern navy, and so ended the daily issue of Pusser’s Rum in the Royal Navy on July 31st, 1970. This date since then is referred to as Black Tot Day. “

A short history of Black Tot and Pusser’s Rum.

Pusser’s video from the 45th Anniversary of Black Tot Day 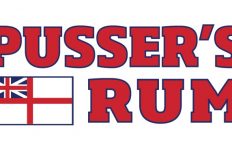 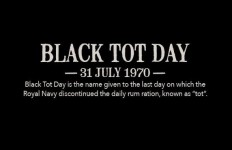