The 2017 edition of the Havana Club Tributo Collection was created from a blend of hand-selected base rums and a decades-old ‘aguardiente’ by Asbel Morales, Havana Club Maestro del Ron Cubano, and is limited to just 2,500 bottles globally. 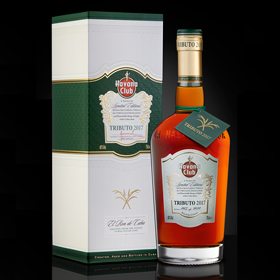 The ‘aguardiente’ – or spirit base – has been matured in barrels that are more than 80 years old, and brings a “distinctive dry note” to the liquid, which also boasts chocolate, tobacco and coffee flavours.

“The extensive reserves at the Havana Club distillery provided us with a wealth of luxurious aged rums to experiment with,” said Morales.

“By blending together a decades-old aguardiente and our precious rums, we have achieved a totally new rum experience that is lively and complex, with a remarkable dry taste imparted by the original Cuban sugar cane character of the aguardiente.

“Havana Club Tributo 2017 celebrates the craftsmanship at the heart of the production of premium rum, from the cane to the cask, and we hope rum drinkers around the world will enjoy it.”

The blend follows the inaugural 2016 edition, and “honours the passion and knowledge” of the Maestros del Ron Cubano role, which was recently been declared a Cultural Patrimony of the Cuban nation by the Culture Ministry.

Each bottle of Havana Club Tributo is individually numbered and features Morales’ signature.

“We are delighted to have launched the latest edition in the Havana Club Tributo Collection and we look forward to building on the success of Tributo 2016,” said Nick Blacknell, international marketing director at Havana Club International.

“With only 2,500 bottles of Havana Club Tributo 2017 being released worldwide, we expect the expression to be popular among global rum and dark spirits connoisseurs who are looking for the next authentic Cuban rum to add to their repertoire.”