Coming off being a Guest RumXP judge at the 2016 Miami Rum Renaissance Festival, I was excited to attend the Midwest Rum Festival in Chicago April 29-May 1st and explore Chicago. I’d never been to the city so I really wanted to just see the city. I kept singing Parthenon Huxley‘s “Chance To Be Loved” over and over to myself all weekend. Chicago has a plethora of amazing tiki bars so exploring as many as possible was important also.

I arrived in Chicago early Friday morning, picked up our rental car, and immediately drove across town to O’hare International Airport to pick Bill Mohler (Rums Unlimited). Weather wise, the whole weekend would prove to be gloomy. 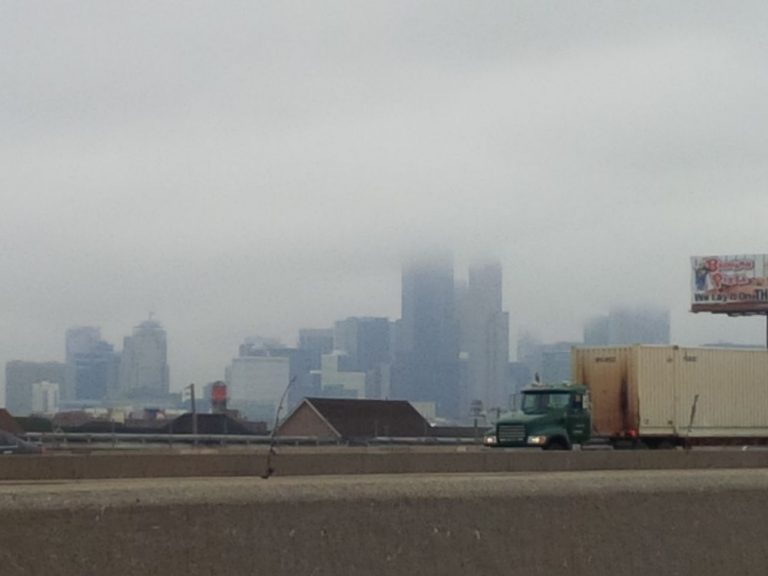 Bill has one of the world’s largest rum collections with over 1500 expressions. He buys rum by the box load and when on vacation his rum hunts push the limits of sanity. Over the course of our three days, really two and a half, Bill bought a dozen bottles to ship home while also jamming 5-6 bottles of rum in his luggage. Naturally our first stop of the weekend was the Liquor Barn north of Chicago so he could shop. He had called in advance so they had a shipping boxes ready for him. 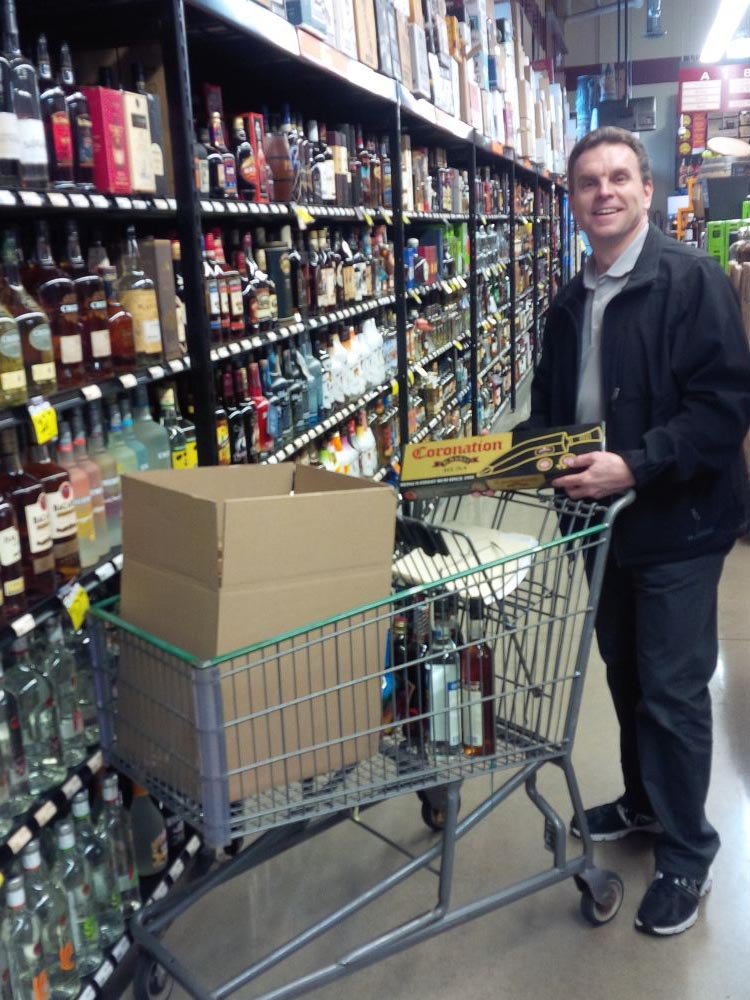 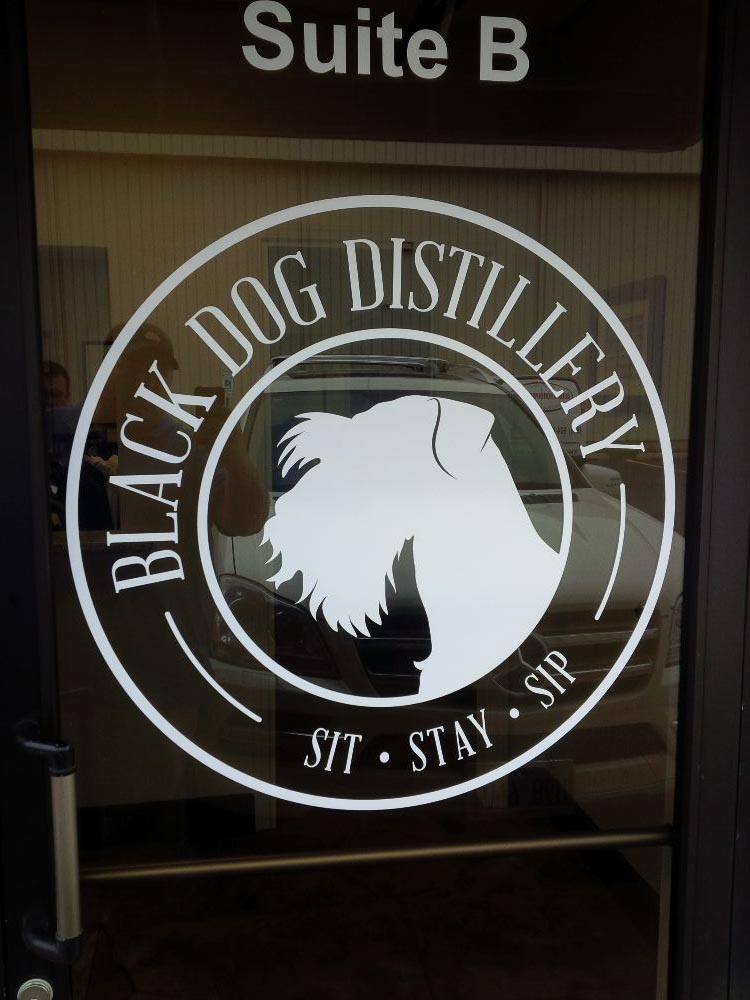 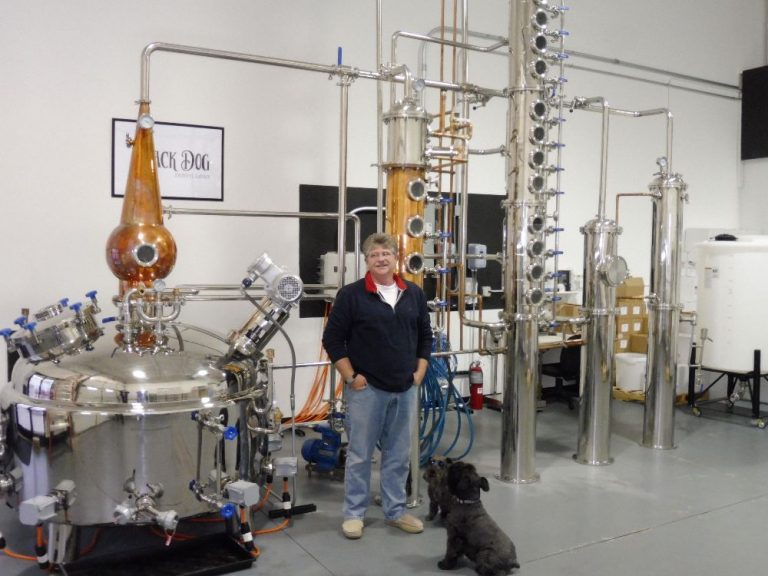 Next we were off to southwest Chicago to visit Toby and Jamey Beall at Tailwinds Distilling. Both brothers are charter pilots who distill in between flights. Their father helps run the tasting room during the week and generally mans the distillery.  We took a quick tour of the facility and sampled all of their rums. Before we knew it, nearly two hours has passed. Bill and I bought a few bottles of Taildragger Rum (with Toby’s lovely wife Jillian on the label) and we were off to our next stop. 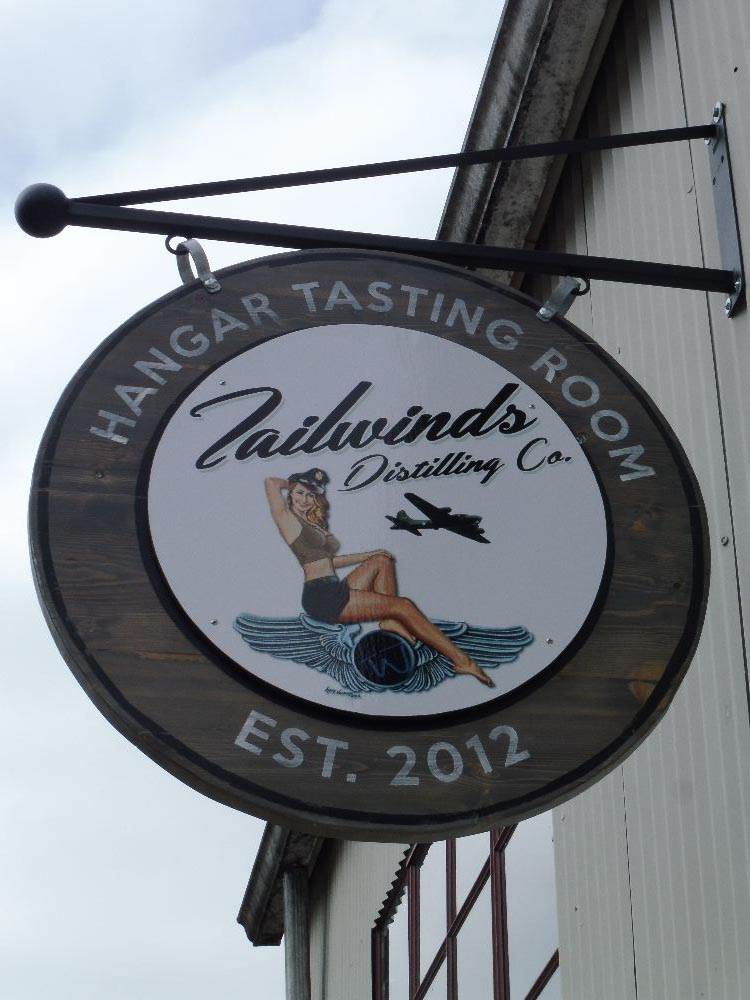 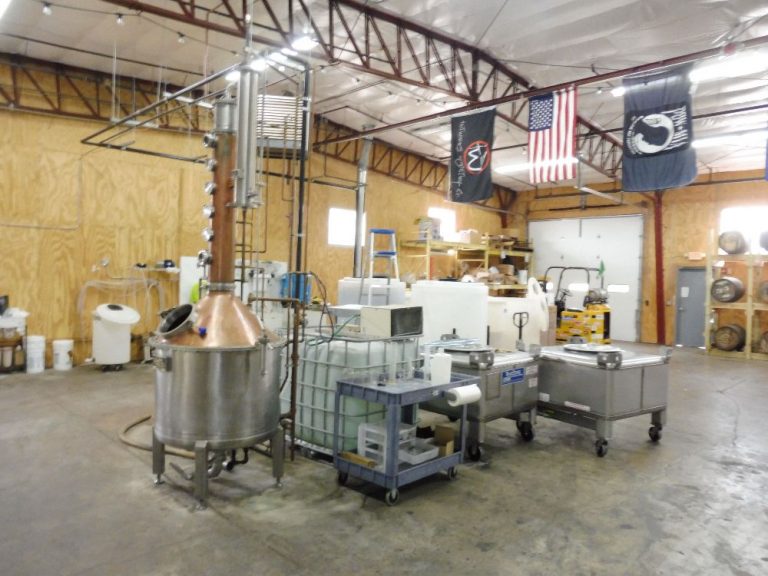 After another rum hunt at the massive Binny’s Beverage Depot, Bill and I attended the MidWest Rum Festival pre-party at Paladar Cuban Restaurant and Rum Bar. Paladar is an authentic Cuban restaurant with a respectable 65+ rum expressions on their back bar. We were joined for dinner by Rum Festival owner Federico Hernandez and Ron Cartavio importer Jim Driscoll. Along with owner Jose Gonzalez, we managed to finish a bottle of Ron Cartavio XO (among other drinks). Jose has a terrific obsession for rum and good food so his dinner advice was spot on. My Oxtail with yuca and sweet plantains was superb. 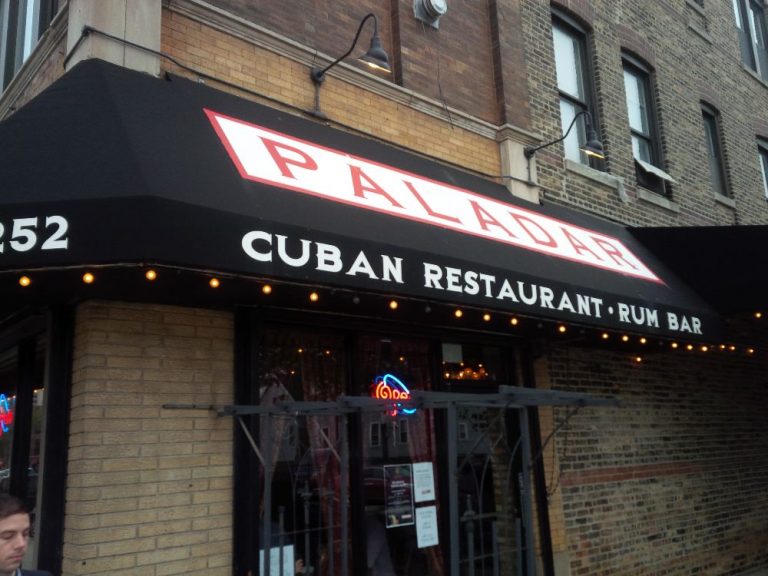 Not wanting the night to end, a number of us met up at Lost Lake Tiki Bar where we spent four plus hours drinking the night away. 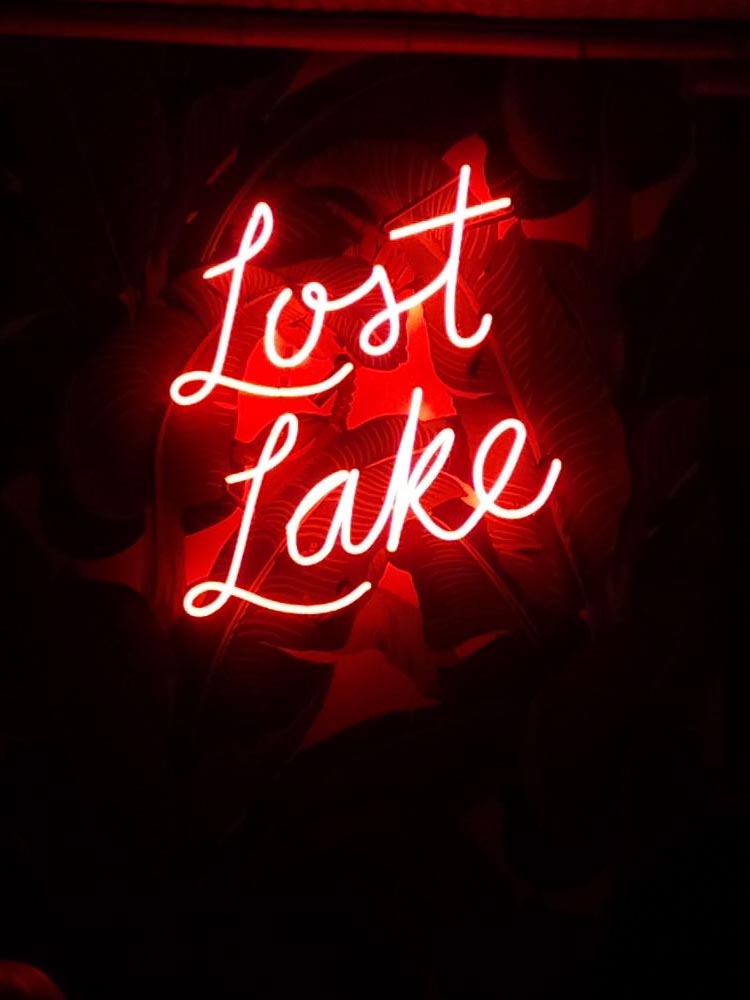 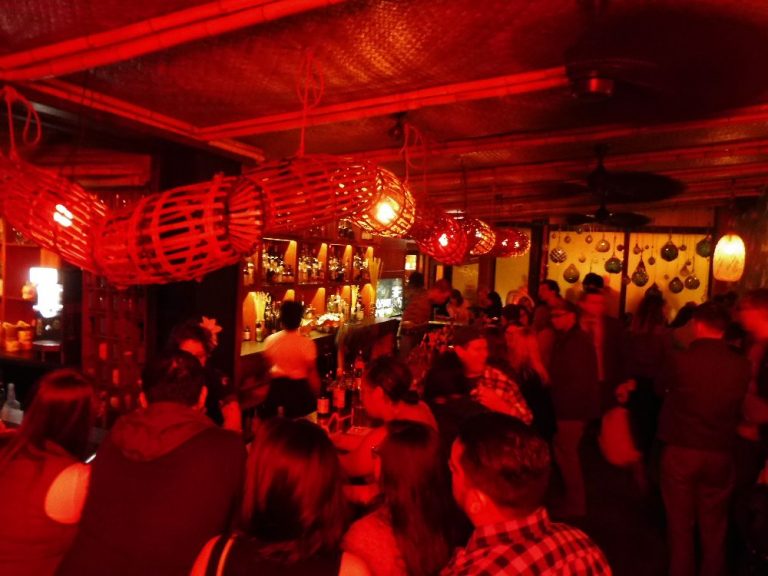 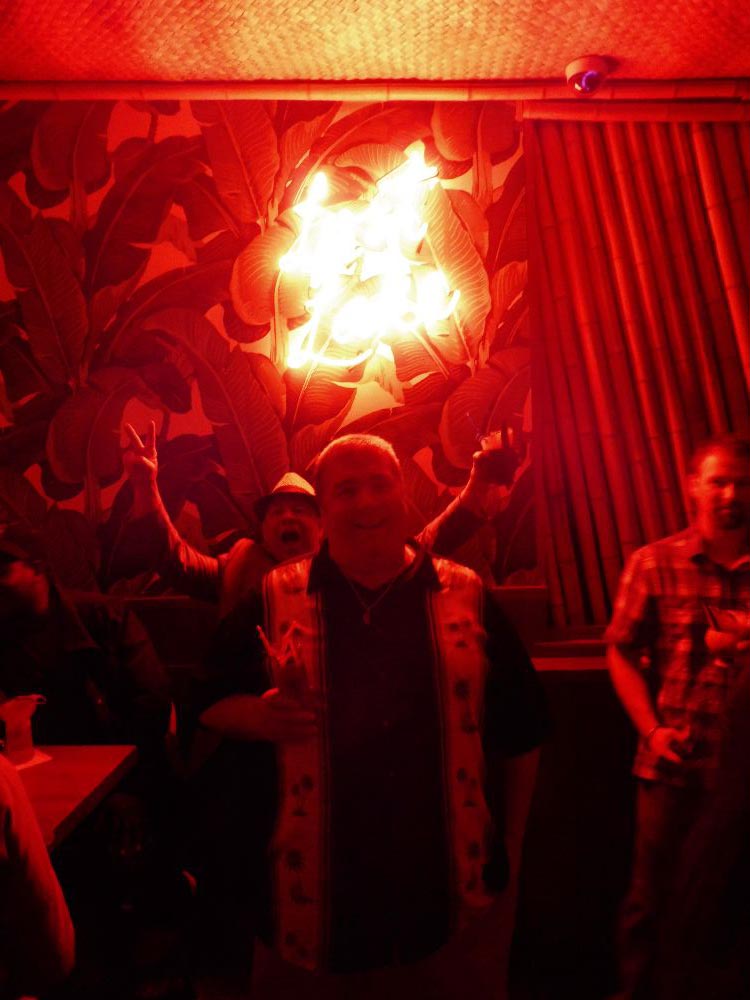 Bill and I grabbed a few short hours of sleep before driving to FedEx to ship Bill’s rum. We arrived at the festival early and volunteered to help with setup including setting up the Ron Duran display with Jim Driscoll and Carole Baker. The Rum Festival ran for nearly 5 hours including the trade-only hour and the grand tasting. Fede arranged a terrific lineup of presentations by The Rum Ambassador Ian Burrell, Nicholas Feris (Rum Collective), and John Meisler (Destilería Serrallés). Nearly all of the national rums were represented during the Grand Tasting  (Bacardi, Goslings, Mount Gay, Zacapa, Blue Chair Bay, Tanduay, etc.) plus a number of terrific premium rums like Rhum J.M., Ron Cartavio, Mezan, Clement, Tiburon, Diplomatico, etc. 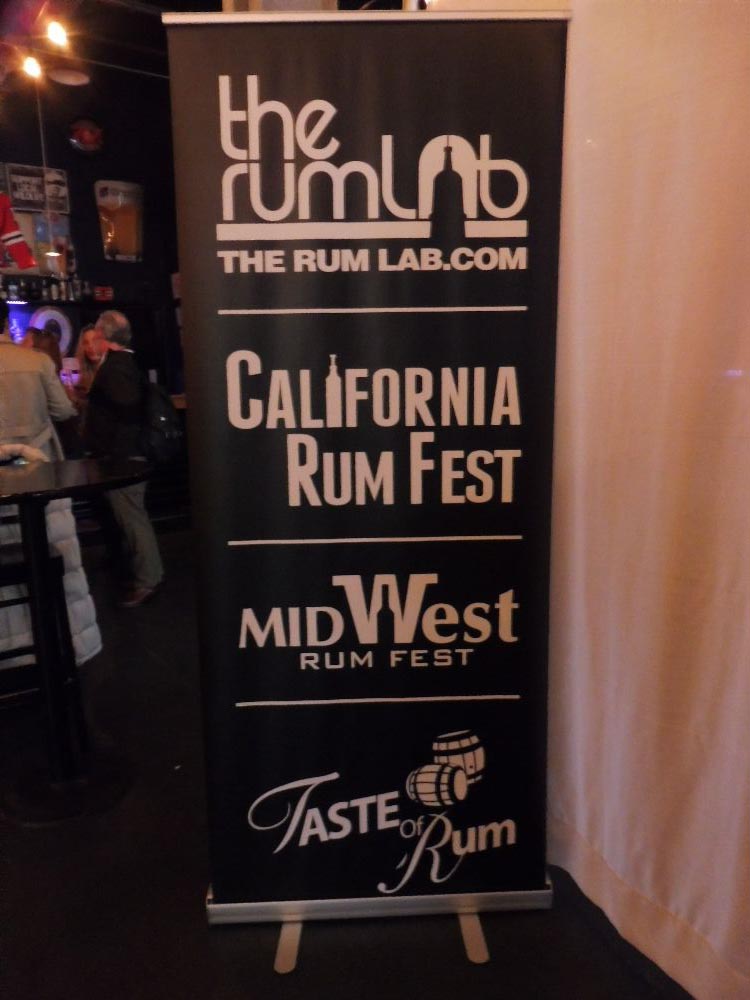 Tanduay Rum from the Philippines. 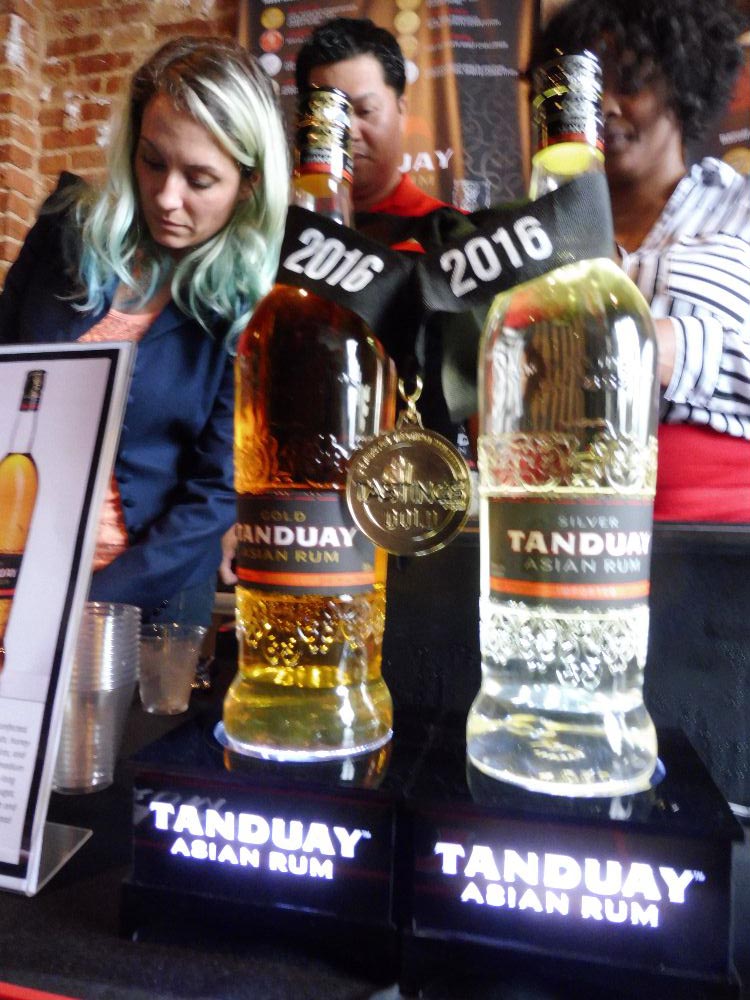 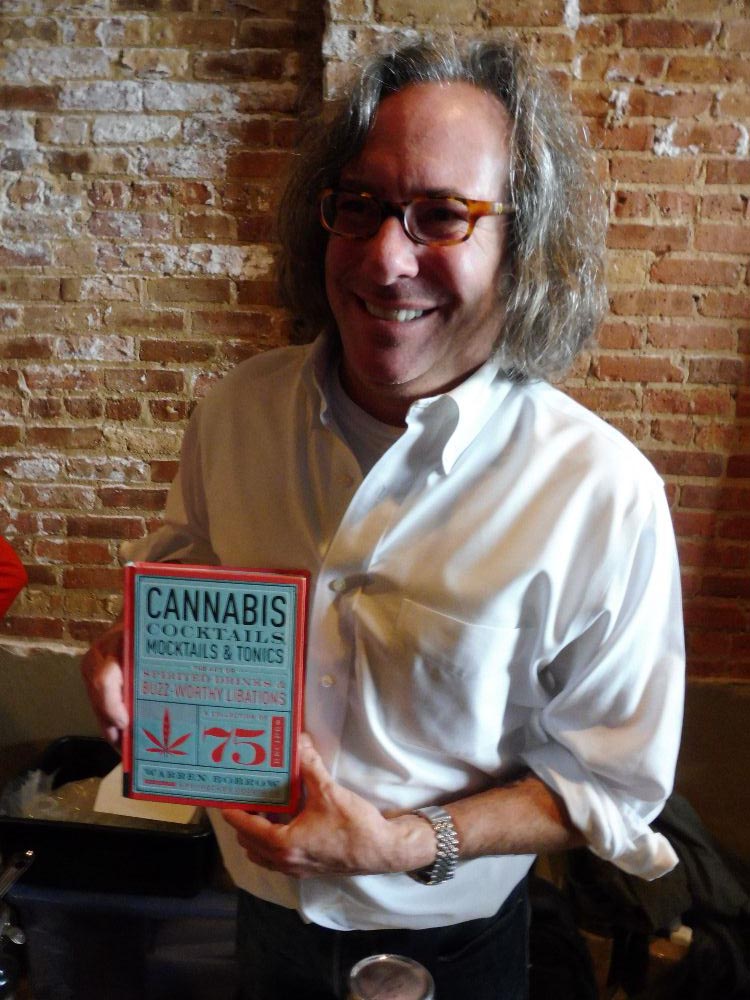 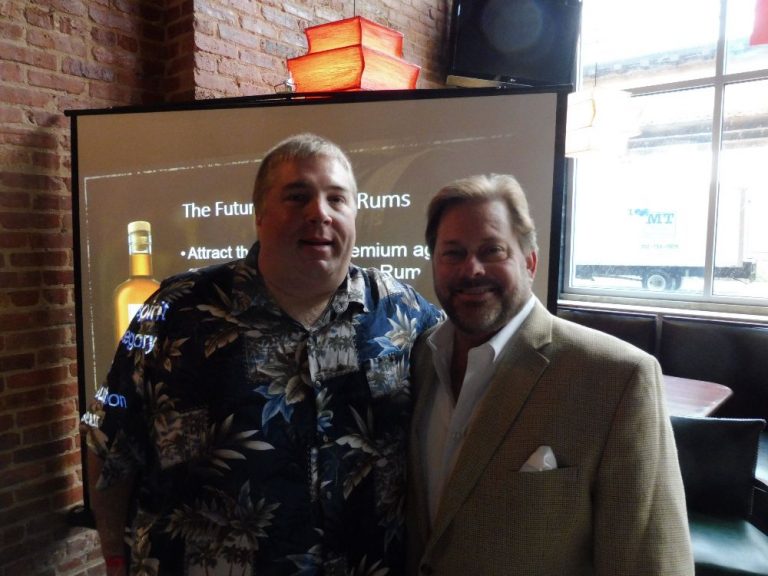 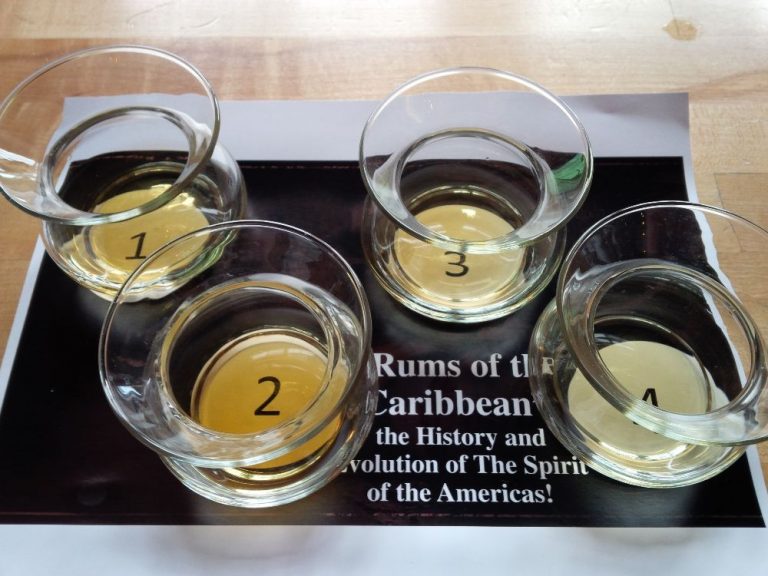 Jack Sparrow (Rick Aspen) shared his Tiberon Rum from Belize with me. 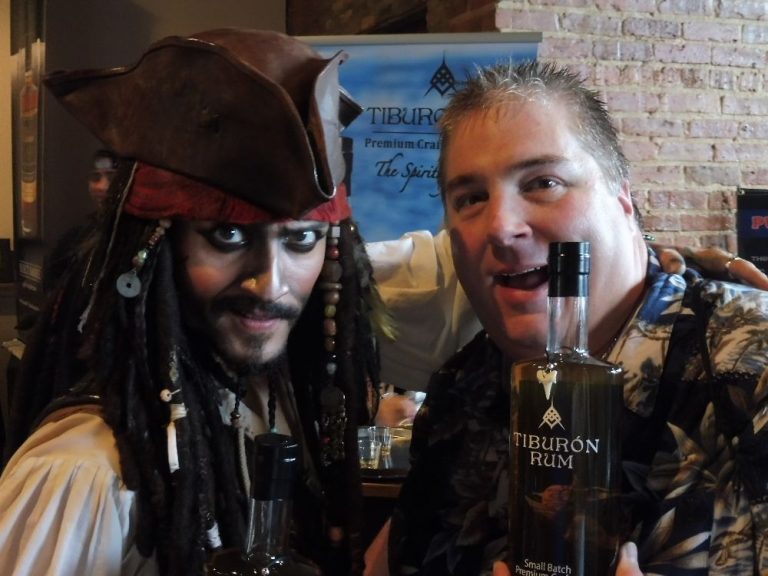 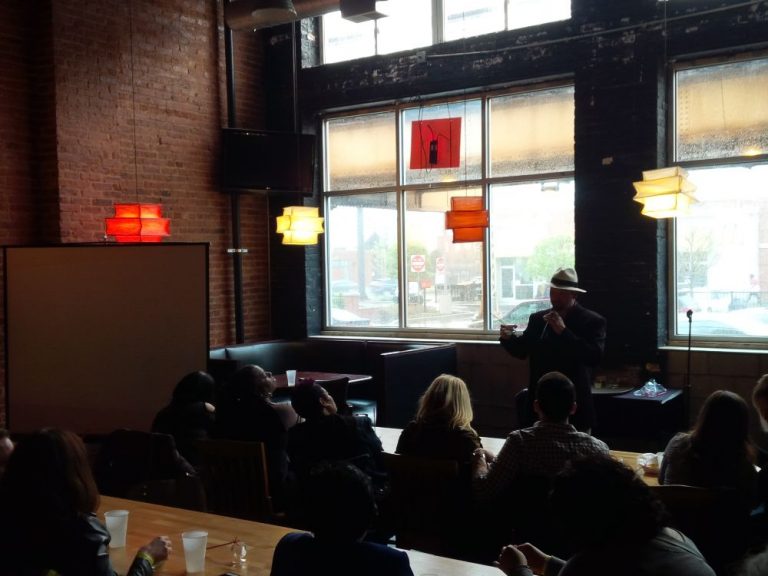 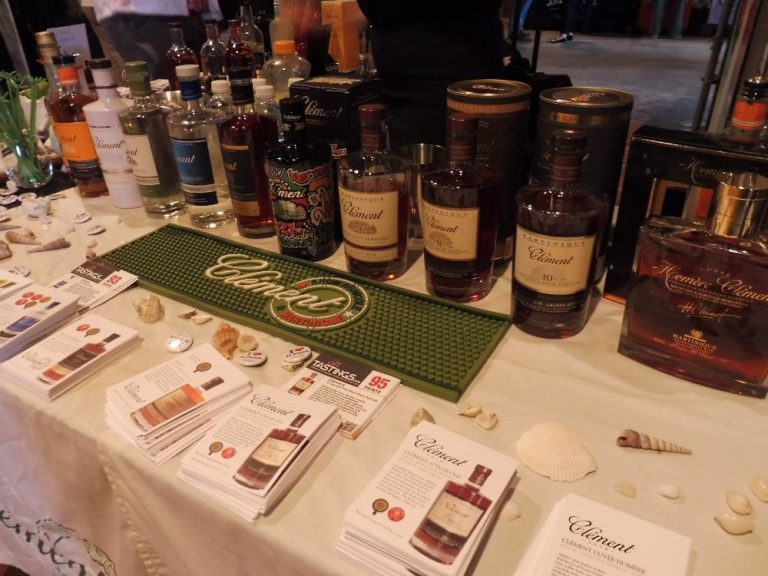 I finally got to meet Ian Burrell. He has my dream job. 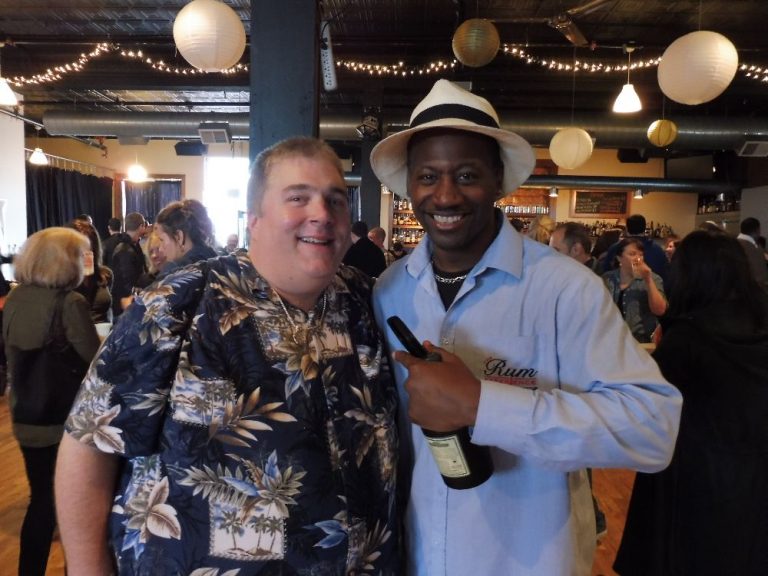 While driving back to the post-festival pary, Bill spotted the CH Distillery so we stopped for a quick visit.  CH is a beautiful restaurant/distillery with an amazing back bar. They have multiple stills that are used for different distillations. The night manager was super nice and volunteered to give us a guided tour of the CH Distillery plus offer us a number of tastings. If you get to Chicago I definitely recommend a visit to CH. Oh, and believe it or not, Bill bought more rum. 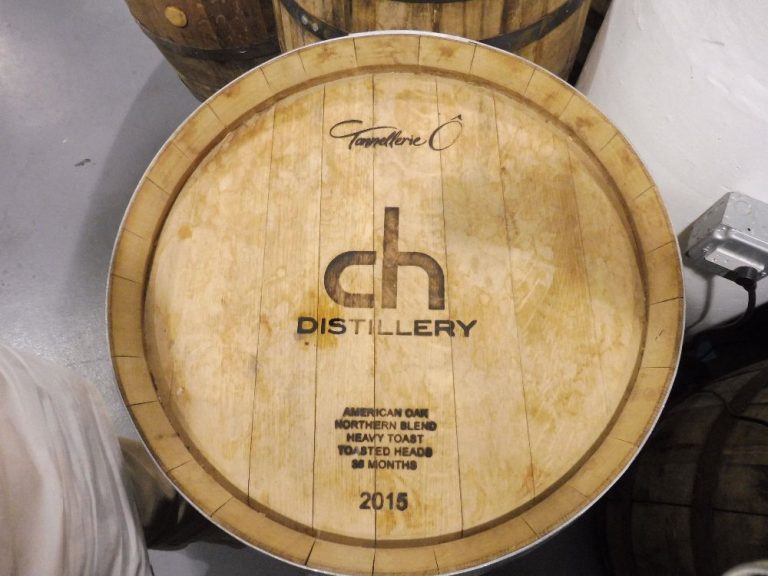 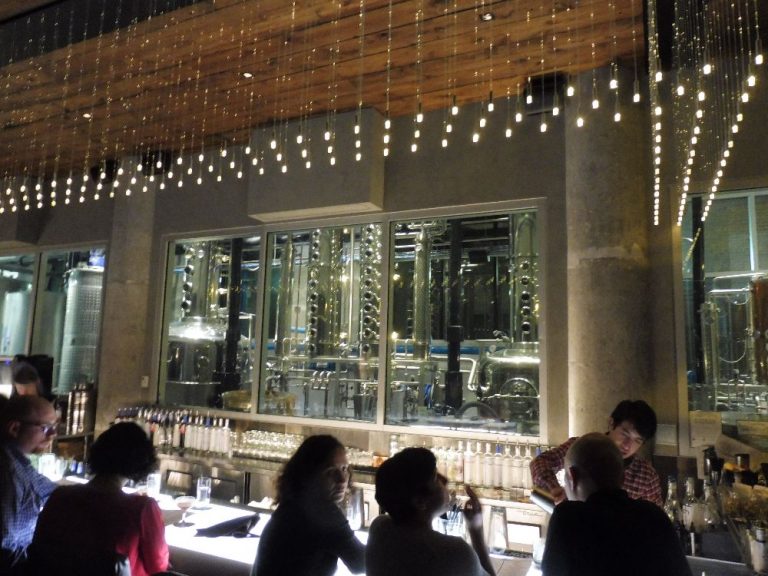 The post-festival tiki party inspired me to drag Bill out to River Grove, IL to visit the historic Hala Kahiki. Opened in 1964, the Kahiki is a third-generation restaurant that could possibly hold the greatest collection of Witco art in the world. Their extensive tiki cocktail menu had the place packed with a number of large groups. 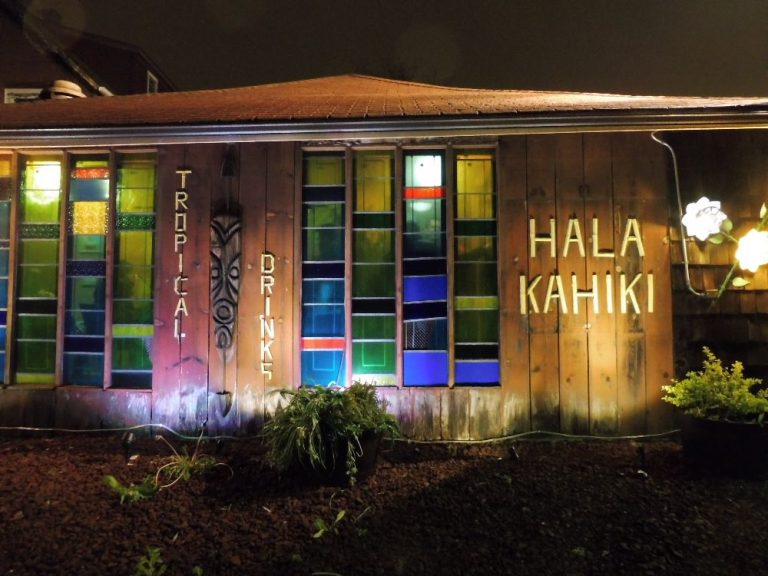 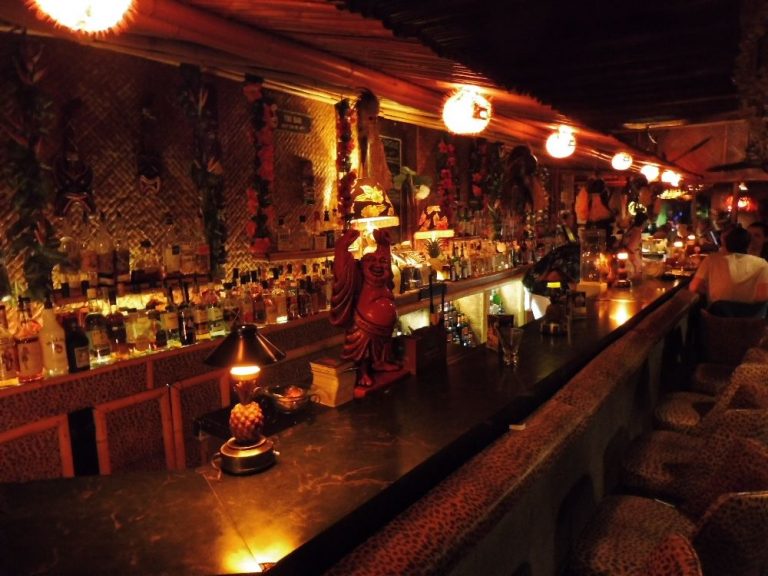 After ordering our drinks at the Kakiki, Bill got a text from Jim Driscoll demanding we drive back downtown to Three Dots and a Dash. Suddenly we were off to our next stop. 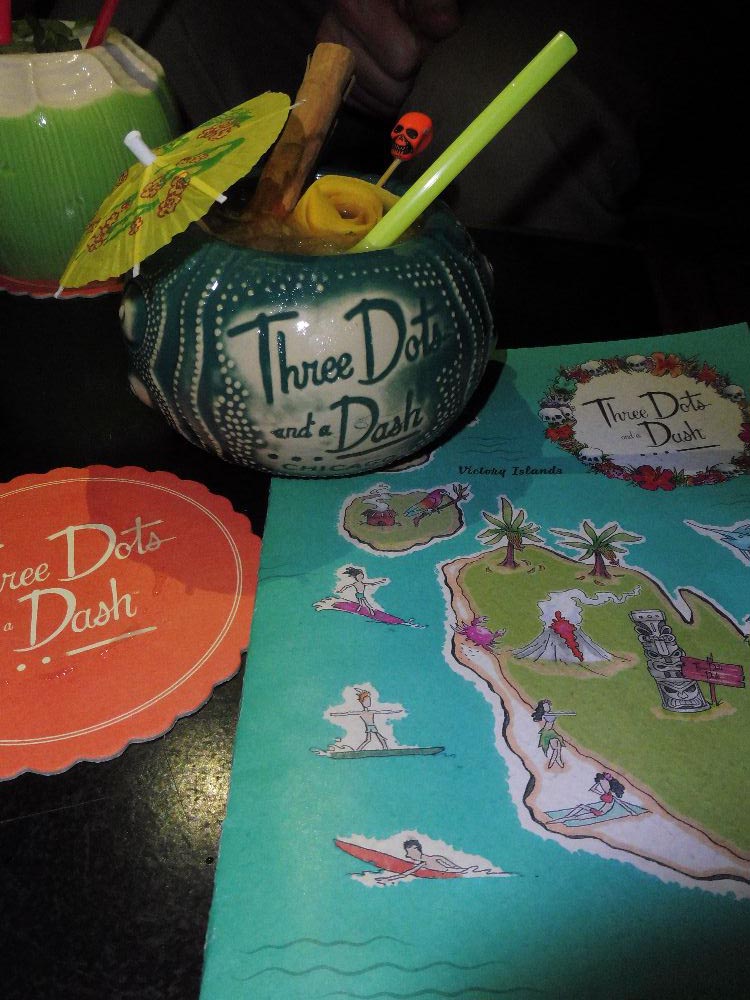 Three Dots is not an easy place to find (remember to go down the alley) and upon our arrival we were told that even though they close at 3am, they stop letting guests in at 2am…whew, good thing we arrived at 1:45am…nope! Security told us to keep stepping. Never deterred, we called Jim inside and he convinced the manager that we were worthy of being let in; Woohoo!

The Three Dots stairway is a sight to behold. When descending into the basement-level bar, guests are given the impression that they are entering a recently unearthed catacombs lined with human skulls. Once inside the bar, however, I was surprised that its “tiki-ness” was fairly muted. Their back bar is lined with a respectable number of excellent rums and tikis while most table tops were covered with spectacular group drinks large enough to satisfy everyone’s thirst. 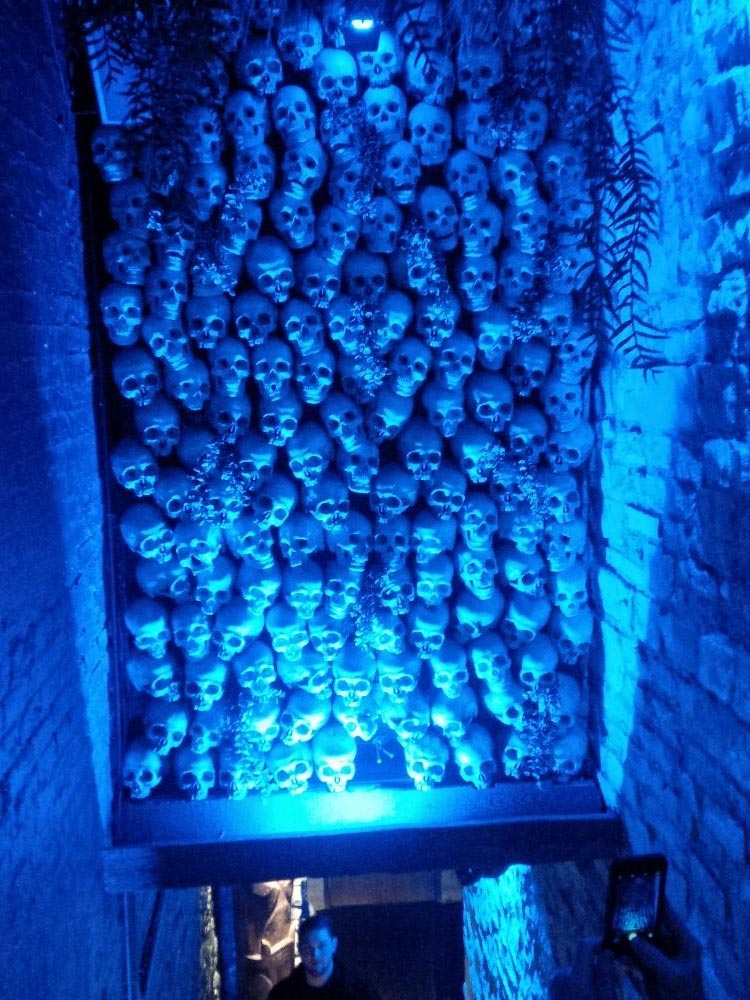 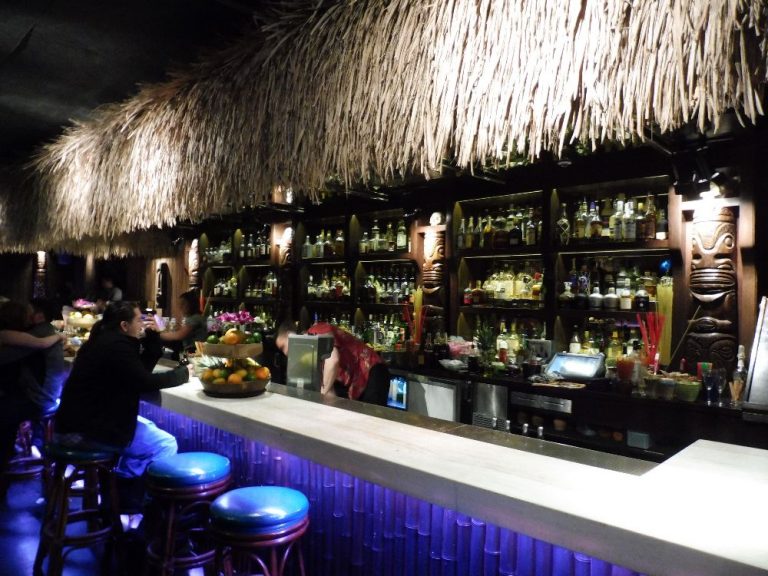 It was a whirlwind weekend that lasted less than 60 hours. I had a great time and I look forward to visiting again next year if possible. 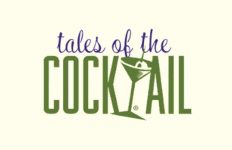