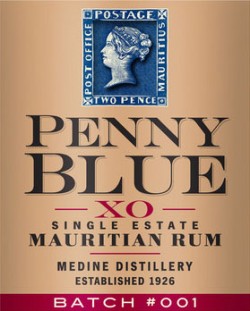 SAN FRANCISCO, CA, September 24, 2013 – The Indian Ocean Rum Company and Berry Bros. & Rudd Spirits are delighted to announce the launch of Penny Blue XO Single Estate Mauritian Rum in the United States through importer, Anchor Distilling Company. Named after the world’s rarest stamp, Penny Blue is distilled at the oldest operational distillery on the Island of Mauritius, Medine, dating back to 1926. The estate is situated a few meters from the sea on the western side of the island near Bambou. Penny Blue joins another Medine-distilled Mauritian rum in the Anchor Distilling portfolio, Pink Pigeon.

Doug McIvor from Berry Bros. & Rudd and Medine’s Master Distiller, Jean Francois Koenig, have selected 14 individual casks at the very peak of their maturity. The single estate, limited edition XO Mauritian rum is a vatting comprised of rum that was matured in American oak whisky casks and French oak Cognac casks. Penny Blue is natural in color, un-chill-filtered and bottled on the estate.

“Penny Blue is a truly unique offering in the world of aged rums” says David King, President of Anchor Distilling Company. “At Anchor, we pride ourselves on bringing exciting products to discerning American customers, and I firmly believe that anyone lucky enough to try this amazing liquid will definitely want more!”

Deep amber with golden hues, Penny Blue has aromas of citrus and orange blossom entwined with rich notes of espresso, clove and honey. Look for hints of tropical fruits and nuts with touches of vanilla and a smooth, long finish – creating a beautiful balance on the palate.

The Penny Blue Stamp, printed in Mauritius in 1847, immediately became a collectors’ item because of its inscription: A mistake by the engraver resulted in it reading “Post Office” rather than the usual “Post Paid.” From the thousand stamps printed at the time, only twelve are believed to be in existence today. The Penny Blue stamp is as rare and highly collectable as this small batch rum.

The first batch of 5,946 individually numbered bottles will be sold in the United States and Europe with 2,500 bottles currently allocated for the U.S. The suggested retail price for Penny Blue is $79.99.

Over 310 years ago, Berry Bros. & Rudd opened its shop at 3 St James’s Street, opposite St James’s Palace. Since its inception, Berry Bros. & Rudd has been a pioneering wine and spirits merchant. Today Berry Bros. & Rudd Spirits Ltd enjoys a super-premium portfolio including No. 3 London Dry Gin (winner of the Gin Trophy at the International Spirits Challenge 2012 & 2013), The Glenrothes Single Malt Whisky and The King’s Ginger Liqueur.

Anchor Distilling Company aims to provide the bridge between discerning buyers and world’s finest spirits. A privately owned distiller and importer, Anchor boasts an artisanal portfolio with over 300 specialty products from nearly 20 countries. Our products are from multigenerational family-owned companies and are sought by connoisseurs for their superior handcrafted artisanal qualities. From a distilling perspective, Anchor Distilling is dedicated to creating very small batches of traditionally distilled spirits.