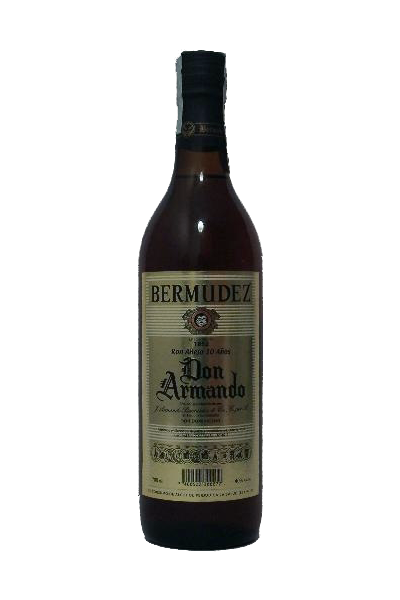 This is a fun rum that my best-est friend Dee Sanders brought back from Dominican Republic for me about a year ago. I’m not sure if you can get any of the Bermudez Rum line in the USA; if you cannot then that is a real shame. The only information online I found for its distribution in the USA was over a year old and the distributor listed has closed its website.

This Bermudez Don Armando Rum was good but not great. I’ll admit to having higher expectations for a 10-year-old rum. It has a slightly spicy and smokey aroma but it also holds a fairly strong alcohol smell that came with those first sniffs; surprising for an aged rum. I also noticed hints of caramel apple and a near Scotch smell.

My 2nd surprise from this aged rum was that its not very good at room temperature. It only improved once I put it over ice and then again over Coke Zero.

At room temperature, Don Armando has a nice iced-tea color and has no noticeable legs. The first sip starts with a light alcohol burn which is followed by an even strong burn. I was glad to taste that subsequent sips found the burn to be less noticeable and the caramel, cinnamon and citrus flavor to be more noticeable. With a couple of ice cubes mixed in the true flavor of this rum was finally unearthed. Here’s where the Scotch flavor returned again with a stronger caramel but true Autumn leaf flavor on show. While of much lesser notes, I also caught waves of a spicy orange flavor which made for a very nice finish.

My last tasting found me pouring a couple of ounces of Don Armando over about four ounces of Coke Zero on ice. While I found this mixture appealing from its balanced sweetness and slightly dry flavor, I now could no long distinguish the rum from the mixture and was only able to slightly detect the aromatic remnants of light moss. A middle of the road rum.