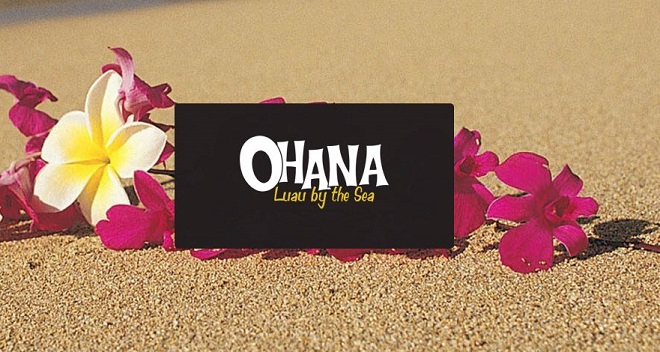 For tiki fans, next week is Ohana, Luau by the Sea in Fort Lauderdale, FL. The event is sponsored by the Fraternal Order of Moai – Gumbo Limbo Chapter. The event will include live surf and exotica music, a Polynesian revue, a classic car show, seminars, and a trip to the 60-year-old, tiki temple Mai-Kai Restaurant. 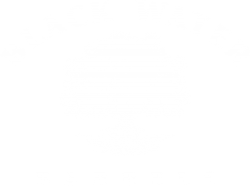 A new barrel manufacturer is opening in Bamberg, South Carolina. The State newspaper reports that Black Water Barrels will “manufacture barrels from top-grade American white oak”. They plan to produce 30,000 barrels per year in a variety of sizes. They hope to target southeastern distillers where shipping cost could be reduced based on proximity. 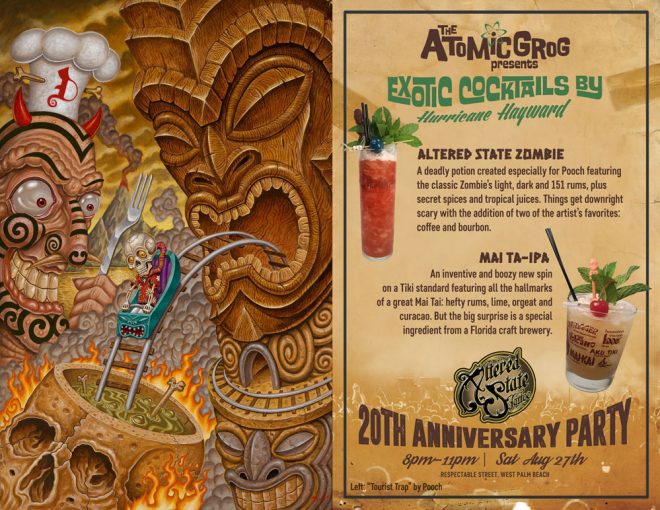 The Atomic Grog maybe the web’s best tiki cocktail website and Hurricane Hayward is back with two new cocktail recipes. Both are twists on classic tiki cocktails…the Mai Tai and the Zombie.

Both twists look to be amazing including dropping bourbon into the Zombie…what?!?!

Combine all the ingredients in a shaker with a cup of ice cubes. Shake for 8-10 seconds, then strain into a double old-fashioned glass filled with crushed ice. Garnish with a spent lime shell, mint spring, and speared cherry. Inspired by Trader Vic’s original Mai Tai, circa 1940s. Sources: Cocktails on Tap: The Art of Mixing Spirits and Beer and 5 Minutes of Rum.

Combine all ingredients in a blender with a heaping cup of crushed ice. Pulse blend for 6-8 seconds and pour into a Tiki mug or large Zombie glass, adding more ice to fill. Garnish with a cinnamon stick, mint spring, plus speared cherry and lime wedge. Inspired by Don the Beachcomber’s original Zombie, circa 1930s. Dedicated to Mike “Pooch” Pucciarelli and 20 years of Altered State Tattoo.

“The original Mai-Kai Decanter was released in 1961 as a collaboration between Don Q Rum and the Mai-Kai. We are now in the 60th Year Celebration of the Mai-Kai and we all love to collect special pieces to commemorate the Anniversary so here’s your chance!

This decanter was created by Eekum Bookum after an idea was presented to Tiki Kiliki to revive the Mai-Kai decanter by Don Q Global Ambassador, Alexx Mouzourris. John Mulder, of Eekum Bookum, sculpted this creation larger and a bit different in detail than the original to be able to give you a one of kind, unique piece.

The original decanter, like this one, is designed after the Cook Islands Tiki God, Tangaroa, the God of the Seas and is highly coveted by Tiki collectors all over the world.

This new creation is larger in design than the original standing an impressive 10 inches at the tallest point and 4.5 inches at his widest point. It also features the Mai-Kai logo on the front of the decanter and the Eekum Bookum logo on the bottom. Each decanter comes with a Mai-Kai swizzle stick too!

There are only 100 pieces in this edition. Purchase now and own a piece of history!!”


Jeff “Beachbum” Berry has the third interview with New Orleans’ Peters Street Regulars: Paul Gustings: The Badass of Broussard’s. It’s a great interview that includes one of my favorite quotes ever! (DiffordsGuide.com )

Another Gustings Don’t is asking guests how they like the drink you made for them. “No,” he insists. “You know it’s good. Because if you don’t know it’s good, then why do you have it? Asking means that you doubt. And you should not doubt yourself, because you know what you’re doing. It’s the same thing when I see people straw test. It just drives me up the wall. It’s insecurity: if you know what you’re doing, you don’t have to taste the drink because you know you did it right. On top of that, as a customer I want a discount. You drank my goddamn drink!”

Tales of the Cocktail is now accepting applications for presenters for the 2017 event. Tales is the world’s largest cocktail convention. For one week, each year, brand ambassadors, bartenders, and thousands of professional drinkers assemble in New Orleans to attend some terrific seminars. So if you’ve got something to share with the drinking world you might want to apply as a presenter. 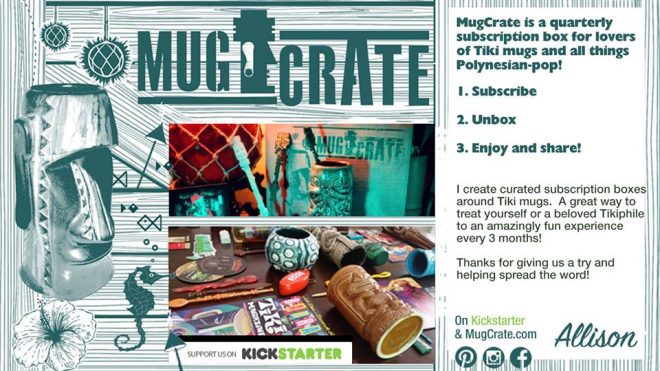 Tiki mug fans have got another reason to celebrate with the launch of Mug Crate.

MugCrate is a subscription box for lovers of Tiki mugs, cocktails,
and all things Polynesian-pop!

What will be in a box?

Each quarter, we will send you a box containing a quality Tiki mug and other surprises for your home tiki bar or next luau. Some of these surprise items might include – art pieces, recipe books, syrups, bitters, bar tools, coasters, swizzles, matchbooks, and the list goes on and on.

We work with Tiki artisans around the world to find great additions to any collection, as well as other items to use in the bar, on the walls, and even in the mugs. We pack these carefully chosen Tiki mugs with an assortment of unique Tiki ephemera and goods.

Each quarter the box will have a theme that wraps the mug, companion items, and drink recipe together. Also, in the box we will work to include information on Tiki events (big and small!) going on around the world to keep you up to date with the larger Tiki movement.


Cooking with rum is almost as awesom as drinking it! Combining rum and coconut with pancakes is even awesomer! Telegraph.co.uk offers a great recipe to make a tasty breakfast treat.

For the pancake mix:

Sift the flour and salt into a mixing bowl and make a well in the middle. Add the yolks and milk and, using a whisk, whisk the flour into them until you have a smooth batter.

In a separate bowl, whisk the egg whites until they form soft peaks. Fold them into the flour mixture. Set aside.

In a frying pan over a medium heat, gently toast the desiccated coconut until golden brown. Transfer to a bowl or plate and leave to cool. When completely cold, add three quarters of it to the pancake mix and stir in.

Put the sugar into another frying pan over a medium heat and leave it to caramelise. When bubbling and brown, add the pineapple pieces and sauté in the caramel for two to three minutes or until softened but not completely stewed. Add the rum and give the pan a little shake. It will be bubbling away by this point. Add the butter and simmer until it gets to a toffee sauce-like consistency. Turn off the heat and leave on the stove.

In the emptied coconut frying pan, heat the butter for the pancakes and, when it’s foaming, add two 50ml ladlefuls of the batter (leaving a gap between them) and cook for two minutes, or until light brown on the bottom and starting to set on top. Flip them over and cook for a further minute or so, until brown on the undersides. Transfer to a plate and repeat with the remaining batter.

Stir the mint into the rum pineapple and spoon over the pancakes. Serve with the ice cream and sprinkle over the remaining toasted coconut.

BLONDE RUM
Mellowed in wine barrels. Say goodbye to boring old white rum and hello to our new unique creation- Blonde Rum. It’s fermented from US-grown raw sugar cane and rested in chardonnay barrels. It’s versatile like white rum, but has more complexity and depth. This is a rum as bright as the sun and as crisp as an ocean breeze. We bottled a day at the beach- but with a little less burn and we left out the sand.

SPICED RUM
Mellowed in wine barrels. Inspired by California’s more earthy inhabitants, this rum evokes blissful memories of a car ride through coastal orange groves farmed by naked hippies who don’t believe in deodorant and wear clove, cinnamon, and vanilla essential oils instead (we all know at least one person). Enjoy our California-style spiced rum on the rocks, neat, or dancing around a drum circle. 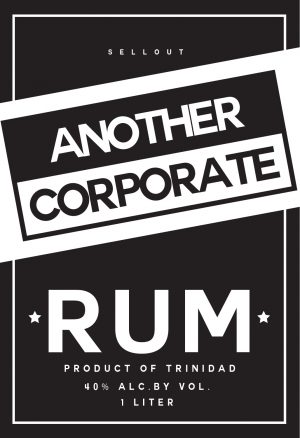 Found in the pages of the TTB: Another Corporate Rum. This is a terrible name that is a trivial joke that never should make it a label. It’s only saving grace is that rums from Trinidad can be great. I hope the juice is better than the name.
(CocktailWonk.com) 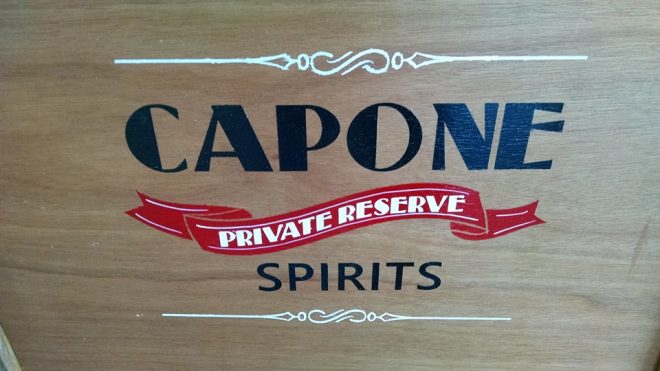 The current spirits made by Capone Private Reserve Distilling are tequila and rum – which recently won a bronze award at the Eighth Annual San Diego Spirits Festival 2016 held Aug. 27-28. “The reason I partnered with Local Choice is that they developed a patented process, to filter out impurities and expedite the aging,” he explained. Local Choice uses a process called Terre PURE where ultrasonic energy, heat, oxygen and other factors, improve the quality and taste of spirits. (Imperialbeachnewsca.com)