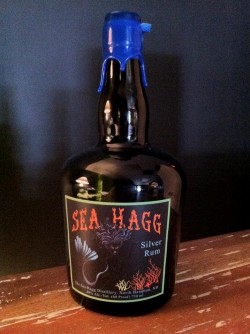 NORTH HAMPTON — Tucked inside a small industrial park along Route 1, partners Heather Hughes and Ron Vars are bringing the art of rum distilling back to the New Hampshire coast.

The idea for Sea Hagg Distillery was born on a Caribbean beach while Hughes and Vars sipped rum punches feeling dissatisfied with their careers and wondering how they could do something similar for the rest of their lives.

They considered the possibility of importing Caribbean rum and adding their own flavors to make their own blends, a process called rectifying, but after considerable research, decided to try their hand at distilling their own rum in their own backyard.

It was not an easy process. They first had to get approved by federal regulators, which required them to get all of their equipment, have a location and be ready to operate, before gaining approval from the state.

Flagg Hill Winery in Lee earned a distilling license about seven years ago, and Hughes said to her knowledge it is the first one given out in New Hampshire since Prohibition.

Sea Hagg Distillery is currently focusing on small batch rums and a white barley whiskey. The rums come in a variety of flavors not commonly seen, including blueberry, peach and strawberry.

Hughes said distilling and fermenting rum domestically has been a growing trend out West in states such as Colorado and California since the federal government began loosening regulations about a decade ago. Massachusetts and Maine also each have a handful of distilleries now.

Hughes traveled to Colorado to participate in a four-day distilling course and then decided to start a business back home. She worked with the local organization SCORE to learn how to do so.

“I knew I wanted to stay on the Seacoast. I live right here and the rum connection is huge. It was the primary beverage for a long time before Prohibition and whiskey,” Hughes said.

Spiced rum also continues to be a big seller in the state, she said.

The town of North Hampton was very supportive of the effort, she said, which is not the case in all locations, where some residents worry about whether the operation will smell bad and about the possible clientele.

Sea Hagg received all the necessary licenses by April 2012 and got to work. Rum takes time to age, and the first bottle of Sea Hagg silver rum was sold on July 4, 2012. An amber rum was rolled out about six months later.

The flavored rums are sourced with local fruits, including wild, low-bush, Maine blueberries, apples from various local farms and strawberries from Applecrest Farm in nearby Hampton Falls.

A white whiskey in the style of an Irish moonshine using a malt barley mash should be rolled out by St. Patrick’s Day.

Sea Hagg is also benefitting from an increase in nano- and micro-breweries in the Seacoast area that are part of the Granite State Growlers Tour, including Blue Lobster Brewery, Throwback Brewery and Earth Eagle Brewery.

“The breweries have paved the way for micro-distilleries. Absolutely,” Hughes said.

Being on Route 1, they also get a lot of customers who are just driving by and are curious about distilling.Visitors to the distillery can try samples in a small tasting room and see the operation for themselves out back while learning about the process.It starts with molasses, which Hughes gets from Louisiana. The molasses is pumped into one of two stainless steel tanks and diluted with warm water. Yeast is then added and the fermentation process begins. The next step is distillation. Sea Hagg has one copper Lambic pot designed in the late 1700s.”We love the flavor of everything we are making in it right now,” Hughes said.They also have an electric still.Once the distillation process is complete after several hours, the rum is transferred to toasted oak barrels for aging. Once the rum is ready, it is filtered and bottled individually, hand labeled and sealed in wax. The bottles come as close to resembling an 18th century rum bottle as Hughes could find.

Sea Hagg rums are now being sold in the state liquor stores, as well as in Maine and soon in Massachusetts.

In the first year, Sea Hagg rolled out about 350 cases of 750-milliliter bottles and would love to be around 2,000 cases next year. Under the company’s current license it can sell 5,000 cases at retail.

“When we get to that point we will need to expand,” Hughes said. “We are definitely trying to grow organically. We don’t want to chunk out more than we’re ready for.”

Sea Hagg is located in Victory Park on Route 1 and is open Wednesday through Friday from noon to 6 p.m. and on Saturdays and Sundays from noon to 4 p.m.