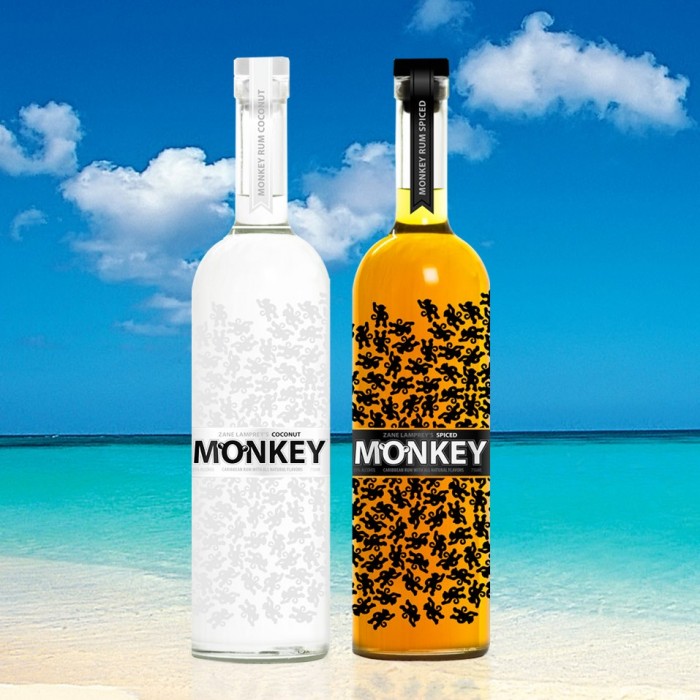 Guess what we’ll be selling in our Mission Valley North store! You guessed it, Monkey Rum from funny-man Zane Lamprey.

Zane Lamprey, host of Three Sheets, Drinking Made Easy and Chug, has traveled the world exploring drinks and drinking cultures. After visiting over 60 countries and every state in the Union, he’s created a spirit that best sums up his adventures – Monkey Rum. The award-winning rums are, as Zane describes them, a vacation in a glass. Monkey Spiced Rum and Monkey Coconut Rum both won Silver Medals at the WSWA Summit and won Triple Gold Medals recently at the Beverly Hills World Spirits Competition.

Q: How did it all get started?
A: I’ve always loved rum. Shooting over 100 episodes of Three Sheets and Drinking Made Easy enabled me to understand the process of making amazing spirits and to know what qualities I most enjoyed in them. It also gave me the opportunity to realize that rum is my favorite spirit. I appreciate other spirits as well, but as a world traveler, I feel that rum is the best beverage to capture the spirit of my travels. Rum is the spirit that makes you feel like you’re on vacation. It’s the liquid equivalent of sitting on a beach, taking in the views, feeling the breeze off the ocean, and listening to island music playing far in the distance. Rum is a vacation in a glass.

Q: Why did you name it “Monkey Rum”?
A: When I began shooting Three Sheets, the first drinking travel show that I hosted, I hid a stuffed monkey in the scenes as part of a game for the viewers. The first viewer to spot the monkey could make everyone else take a sip of their drink. It quickly caught on, and is a tradition that I carried over into Drinking Made Easy and now into my most recent show, Country Hopping’s Ultimate Guide (C.H.U.G.)!

Q: How involved were you in the process of making Monkey Rum?
A: Monkey Rum has been a passion project from me from Day One – which was over two years ago. I wasn’t interested in just putting my name on a bottle and collecting royalty checks. The process of creating Monkey Rum was entirely the opposite of that. All of the money invested in the rum has been my own. I’ve taken every step along the way, from finding the best rum, selecting the best (all natural) flavors, and designing the bottles. It’s been long and difficult, but when someone takes a sip, their eyes light up, and they say (surprised) “Wow, that’s actually really good” – that’s the reward. I may be perceived as a comedian who travels and drinks, but my experiences and passion for spirits have made me become much more than that. I don’t claim to be an expert, but I do know what tastes good, and what people like. I’ve worked with the best people to create that product, which is something that I’m proud to put my name on.

Q: With the success of your earlier shows, you’ve been busy traveling the
world to experience and educate American viewers on Spirits, Wine and Beer, as
well as various drinking cultures and the art of mixology. So what’s next?
A: Starting out as a host and comedian, I never expected to find myself traveling the world hosting shows about drinking, let alone becoming an authority on the subject. But, as that’s been the case, I’ve found that I’ve greatly increased my knowledge about spirits, wine and beer with every producer that I’ve met with. Although the scenes edit down to about five minutes, I spend about an hour for every one of those scenes at distilleries, breweries or wineries, learning about how they make their product and how it is accepted and perceived in the marketplace. With Chug, I’m now on the third venture, meeting even more producers and what makes distinguishes their products from others.

Q: Aside from Rum, what do you consider to be your favorite beverage?
A: In addition to rum, I also love beer. With all of the amazing craft beer offerings, there’s always something new to try – especially at BevMo!

Q. When can we taste it?
A. Meet me at the BevMo! in the new Mission Valley North store on Saturday, August 17th! I’ll be there from 11am – 1pm to greet the fans and officially launch Monkey Rum. Details here>> Click for details.

Please Note: the rum is only available in the BevMo! in Mission Valley North, 5644 Mission Center Road.Beverly_Hills_Awards Monkey Rum“Monkey Rum Wins Triple Gold at Beverly Hills World Spirits Competition” Zane Lamprey’s Spiced Monkey Rum and Monkey Coconut Rum have both won “Triple Gold” at the the Beverly Hills World Spirits Competition. The annual competition sponsored by Flowdesign allows for spirit brands from around the world to compete and be judged by a highly regard group of experts from Beverly Hills restaurants, hotels, and bars. Each entry is judged on taste, packaging, and overall design and awarded bronze, silver, gold, or triple gold.