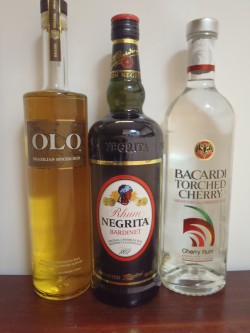 Every couple of weeks or so I make a point to swing by the few large liquor stores to check out their clearance racks. Most of the time I come up empty but occasionally I find some nice deals. Today was a good day as I found three clearance bottles that I’ve never tried:

I was lucky enough to find all three at Total Wine for $9.99 each. The Rhum Negrita could be their regular price…all I do know is that’s a great price for a French imported, Caribbean made rum.

Honestly, I did not know that Rhum Negrita was still in production. I’ve seen the brand on Peter’s Rum Labels but I believed that the company was long out of business. I was pleasantly surprised to find it on the shelf.

I’ve had the the Bacardi Cherry rum before and thought this ‘flavor’ had been completely clearanced by now (my sample was mini-bottles). My wife is a fan of RED RUM which has hints of cherry so I am hoping that she likes the Bacardi too.

I’m not sure about the OLO “Brazilian” rum. Brazilian rum usually means Cachaca. I’m not the biggest Cachaca fan however. I dig Caipirinhas but not much beyond that. Digging around the internet I found that OLO was distributed by Constellation Brands but they no longer list OLO as one of their ‘Spirits’. I’m not sure if this is discontinued nationwide or not. I guess this bottle will be a bit of an adventure for me. I might have to invite my friend Shilpa over to help me with the bottle. 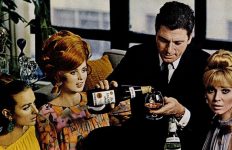 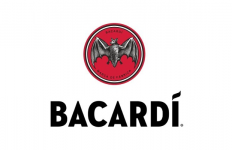