After quietly pulling from my bottle of Ron Diaz 93 Spiced for a few weeks, I found its volume had dwindled to about 4 ounces. Worried that I wouldn’t have enough to write a review I moved the bottle to the side to keep myself from finishing the bottle. Unfortunately that meant, I admit, that those four remaining ounces sat in the back of my cabinet for more than six months. So this past week I pulled about ten close to empty bottles from my cabinet with a goal of reviewing them ASAP.

Over the past few years a Spiced Rum war has been ragging. Multiple brands have been swinging away at the Captain (Captain Morgan) whom is the undisputed King of Spiced Rum. Brands like Sailor Jerry, Kraken, Malibu Spiced, Cruzan 9, Blackheart, Shellback, and many, many others have stepped up to challenge the King.

In this mighty struggle you will find Ron Diaz 93 Spiced Rum. Looking to one up Sailor Jerry (92 proof), Ron Diaz comes in at a higher proof (93 proof) than most rums. They hope that an affordable price, simple bottle presentation, and a somewhat mild, sugary palette will lead to more bottles of Ron Diaz in American liquor cabinets.

Ron Diaz 93 Spiced rum is packaged in a fairly generic bottle with translucent labels that allow consumers to notice it’s dark wheat color. The label declares that it is “Crafted with Barbados Rum, Spices, Caramel, and Other Natural Flavors”‘

The back label states the following:

Whether you are looking to sip on the world’s best tasting Rum on the rocks, or rev up your night, Ronnie D 93 will take you there. We continue our award winning Barbados Aged Rum, the finest Madagascar Vanilla, and Spices from the West Indies to create the treasure in this bottle.

Below the quote, along side a fairly scary skull image the capitalized block print reads:

S0 there you have it…You’ve been warned! 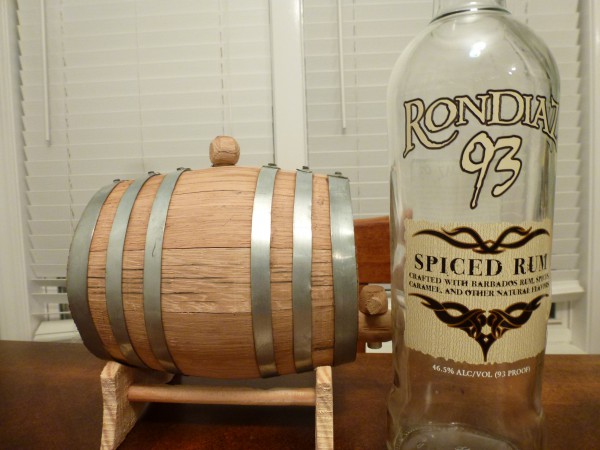 Upon the initial pour, I immediately detected notes of vanilla and butter. After letting the rum rest for a few minutes, I caught a strong scent of sugar cookies which turned into a strong vanilla cake/vanilla frosting aroma.

Since this is a 93 proof rum I was expecting a more prevalent burn from Ron Diaz 93 Spiced rum but it never came. I would describe it as more of a warmth than a burn. On first taste, there is an immediate wave of vanilla and warm spice flavors. A definitive peppercorn spice followed  which brought a nice tingle to my tongue. In ways, Ron Diaz 93 Spiced rum reminded me of a navy rum but smoother.

The warmth from the higher proof was much less prevalent when I added a single ice cube to my glass. The vanilla and butter notes almost disappeared while the peppercorn, and a hint of cinnamon, coat the palette and leave a pleasant semi-sweet vanilla finish.

Ron Diaz 93 Spiced Rum makes a pretty good Cube Libre.  I noticed the light oak, pepper spice and semi-sweet vanilla allow it to blend well with the Coke Zero. Most drinkers could easily enjoy a number of these mixes throughout an evening.

– Much less expensive then competitors

Ron Diaz 93 Spiced was exactly as the bottle described: