I’ve been blending and self-ageing rum for a few years now. For the most part my experiments have turned out pretty well. My latest batch, 5 liters of Shellback Caribbean Silver Rum, has been barrel resting for nearly six months. In that time the rum picked up a nice golden hay hue but flavor-wise, it didn’t really perk up very much. So I have decided to spice things up a bit.

Last summer was my first attempt at spicing rum. I had some Don Q Silver that did not really shine when it came out of the barrel so I tried three separate spice recipes. For all of them I made the mistake of soaking the cinnamon stick for 3 days; that is wwwaaayyy too long. To salvage the batch I removed the cinnamon and left the other spices to soak for another 5 days. The cinnamon flavor was still overpowering so I blended in some unaged Don Q to tone down the spice a bit. 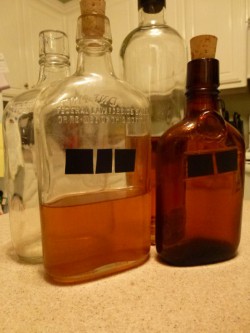 Not wanting to have the same issue this time around, I removed the cinnamon stick after a 24-hour soak but left the remaining spices for a few more days. Hopefully I will see a more consistent flavor palette.

When I started ageing rum I viewed it as another opportunity to share my hobby with my friends. I really don’t need another gallon or so of rum so I give it away to friends one pint at a time.

To make my sharing special, I bought a box of 1950s cork pint/half pint bottles at an estate auction. I cleaned and sanitized the bottles thoroughly, bought new corks and bottled up the rum for friends. I encouraged each of them to bring back their empty bottles and I will fill them up when the next batch is ready. The feedback from people has been good and each batch is now eagerly anticipated. I’ve got four bottles waiting for this latest self-spiced batch to be ready. 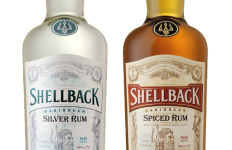