These debut bottles are filled from a single barrel of Mountain Bum Rum that was floating in the distillery during the historic floods that swamped Lyons last September.

“This rum,” says Spirit Hound distiller Craig Engelhorn, “is 80-proof and flood proof. It was aged in a used Buffalo Trace whiskey barrel for five months,” he says, “and for one day in flood waters. It’s like no other rum in the world.” 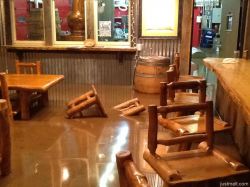 The first bottle of these specially marked “flood-aged” bottles will be donated to J.J. Hoffman, chief of the Lyons Fire Protection District, in recognition of his and his department’s efforts during the flood.

Ten percent of all subsequent sales of the flood-aged rum will also be donated to that fund.

Engelhorn says the rum was made of a 50/50 mix of Caribbean molasses and cane sugar, double distilled in the copper still he hand built for Spirit Hound.

Spirit Hound’s Neil Sullivan says the rum is especially significant. “This batch,”
he says, “commemorates what our distillery and the rum went through the past four months. We really hope these are ‘once in a lifetime’ bottles of Mountain Bum Rum.”

The barrel of flood-aged rum produced about 500 bottles of rum. Spirit Hound hopes to release more barrels of Mountain Bum over the next few months.

More details on the company’s spirits and story are available at www.spirithounddistillers.com.