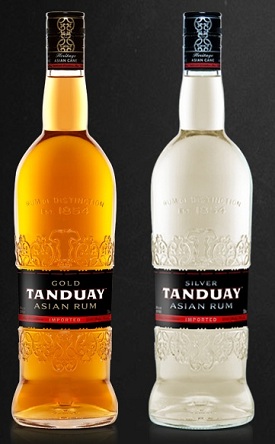 Serious rum drinkers know that Bacardi is the world’s largest rum maker but many probably do not know which company is the 2nd largest?

That would be Philippines-based Tanduay Distillers.

The next question most American drinkers will ask “Who is Tanduay?”

“Tanduay is probably the best rum company with the least awareness in the United States,” Robert A. Burr, founder of Rob’s Rum Guide, wrote in an email. “Those that have traveled to the Philippines and Asia know it as the dominant brand of rum in that region, but their presence in the United States has been greatly missed — until now.” – courant.com

Established in 1854, it is one of only a small, elite group of rum brands over 150 years old. The Lucio Tan Group purchased the company in 1988. Reportedly their production is only 200,000 cases/year behind Bacardi so Tanduay’s penetration into the U.S. market could push them to number one.

Tanduay desired a summer launch and has crafted two rums (Silver Asian Rum & Gold Asian Rum) especially for the international market. Tanduay located their Brand Headquarters in Connecticut due to the states relaxed distribution laws. Connecticut distribution began in early August but they began a roll-out of their “Asian Rum” in the Southern Florida market in late July.

“We had to reassess our rums against the Western tastes,” said Joey Macion, vice president of marketing for Tanduay, based in Manila. “We developed rums that we tested against the U.S. consumer and found that it was appealing to the U.S. consumer, when we knew we could compete with other rums in the U.S.”

“We retained the signature taste of Tanduay which is so loved here, its basic taste, with what Asia is known for: spices, dried fruits and other exotic tastes and which, again, were the reasons why the U.S. market quite liked the liquids,” Macion said. “So the taste was retained but we enhanced the Asianness of the product to appeal to the Western market.”

As a result, TANDUAY Asian Rum makes for an intriguing and alluring taste experience whether enjoyed straight, on the rocks, or mixed.