Walking into the Golden Plough Tavern is taking a step back in time. Built in 1741 in York PA, the mid-18th century building originally served as a town hotspot for news and happenings as well as serving as a tavern, restaurant, and hotel. Members of the Second Continental Congress could have enjoyed spirited rounds of debate and libations in the tavern while adopting the Articles of Confederation from 1777–1778. Just a few years later, participants of the 1791 Whiskey Rebellion, which took place in Eastern Pennsylvania and Western Maryland, might have used the tavern to rally against the newly imposed Federal Whiskey Tax designed to repay American Revolutionary War debt. 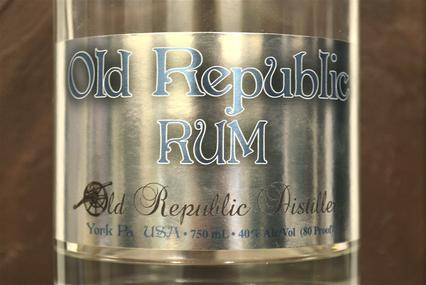 Old Republic White Rum was created as a tribute to an old distillery that operated in York County during the American Revolutionary War. Called “New Republic Distillery”, the whiskey distillery was known to produce the finest quality whisky. The distillery was destroyed by the British during the war and its name became a rallying cry for local fighters. Old Republic Rum is produced and dedicated in tribute to this part of Pennsylvania distilling history. Old Republic White Rum boasts that its “bursting with flavor” and that “tropical drinks will go to a whole new level of delicious” with this small batch white rum. Old Republic Rum is bottled at 80 proof (40% ABV).