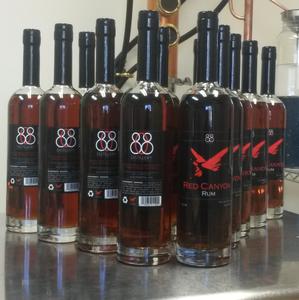 Formulated to function more as a sipping rum rather than a mixing rum, 808 Distillery’s latest craft spirits, Red Canyon Rum and Red Canyon Spiced Rum, are distilled and aged in one-gallon quantities.

Headquartered in Eagle, CO, 808 Distillery is only in their second year of operation. The company built a small red building that sits next to co-owner Claude Seeman’s home. Seeman and partner Jeff Leonardo designed and built the building themselves. That “do-it-yourself” drive carries over to the production of their spirits. Their first expression, Leo’s Limoncello, is a lemon-flavored liquor that launched in 2014.

808 Distillery is named after the property’s address. They do not sell their product on site but the hand-crafted spirits can be found in local liquor stores and restaurants.