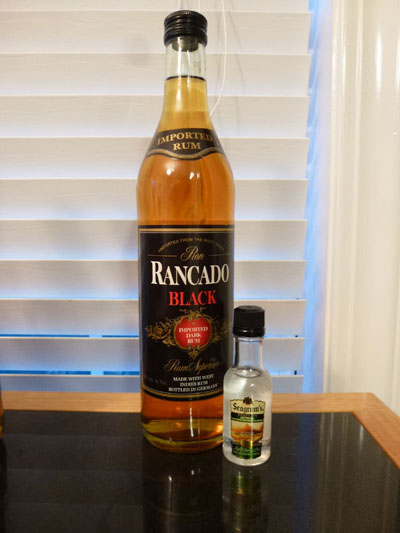 Back in March I picked up a few bottles of Ron Rancado Black after finding it reduced to $6.99/bottle at Total Wine. I quickly opened a bottle and used it in my Maple Old Fashion a few months ago. It is a serviceable rum for mixing but I have never given it a proper review for this site.

Last night, while searching for a rum to review, I found a bottle of Ron Rancado Black with only a few ounces remaining in the bottle. Naturally this called for a tasting before the bottle was empty. Too bad today I discovered that Ron Rancado Black no longer seems be available.*

Presentation: Ron Rancado Black comes in a tall, sleek bottle with a mostly black label. While I like the leaner, taller bottle it’s irregular size makes shelf-placement difficult (vendors don’t like that).

I found it odd that Ron Rancado labeled this as a Black rum yet the rum has a golden hue. Most black (or dark) rums are just that, molasses black in color and have a much bolder, heavier flavor.

Naming the rum ‘Black’ isn’t the only questionable labeling choice for Ron Rancado. During my rum research, I noticed some differences between the German bottle’s label (“Tropical Dry” & “From the West Indies”) and the labeling on my U.S. bottle (“Imported Rum”, “Made With West Indies Rum” & “Bottled In Germany”). I am not sure Ron Rancado’s producers know exactly how they want to market this rum. This issue alone might explain it’s disappearance (more on that later).

Aroma: The rum has a soft, caramel color with fairly weak legs (lack of ageing?). There is a light rummy aroma with hints of pepper, wood and alcohol.

Neat: Tasting Ron Rancado Black reveals a light, oak flavor rum with a hint of crushed walnut shells. The linger is light except for a slight, back-of-the-throat burn.

Review Score: 6 of 10. While this is not the best rum to drink straight, it is fine for mixing. It carries a mellow spice flavor that would blend well in almost any drink. Worth $7/bottle but probably not much more.